7 Phrases Gaslighters Use to Manipulate & Confuse (Don't Fall For These) 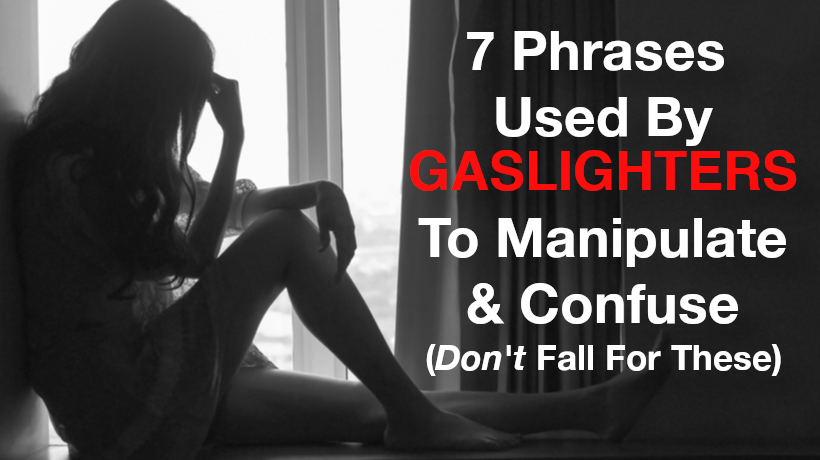 When you are the victim of someone gaslighting you, it means they are trying to make you doubt your feelings, thoughts, and judgment when it comes to confronting them with what they have done wrong to you. According to Claire Jack, Ph.D., there are seven common phrases used by gaslighters that can confuse and control their victim.

Using a phrase like this leaves the victim in a difficult position. It shows that the person is trying to change their character, and make you believe that they want to put differences aside. It makes what happened between you to be insignificant, that it’s all in your head there ever was a problem. It makes you feel like you’re holding a grudge, but your feelings are still valid.

“It’s all water under the bridge”

This phrase allows the gaslighter to play the victim themselves. It tries to make you feel bad for calling them out on the hurtful behavior that they have done to you. Remember, gaslighting is a form of emotional abuse, according to Lisa Marie Bobby, Ph.D. They will try to manipulate your thoughts and feelings by looking sad, confused, and not knowing what they have done.

“I won’t stand for lies/dishonesty/a lack of professionalism”

Gaslighters will tend to state their value of honesty and fairness when it is not needed in a situation of confrontation. They don’t want to be caught for their own lies, so they make sure that their victims are intimidated by the fact that they value honesty in any relationship.

“I have no idea what you’re talking about”

This statement is simple but can be very effective. Gaslighters can follow up by saying that you are crazy for accusing them of their hurtful behavior. They can also claim that they have no idea why you are upset or angry, playing that they are the innocent ones. It can leave a victim thinking if there really is a problem or it’s just all in their head and there is nothing to be upset about.

“Don’t take it so personally”

Gaslighters will say hurtful things and can get upset with you if you stand up for yourself and tell them you don’t like the way they are speaking or acting towards you. If you react with anger or become upset, they criticize you for taking it personally. What the gaslighter is doing, in this case, is invalidating your experience and feelings.

“Nobody else feels that way”

According to Suzanne Falck, MD, people who gaslight other people in their lives may have a narcissistic personality. Meaning that they will get other people on their side and create groups of sympathizers. If you try to confront your gaslighter, they may point out that no one else is experiencing what you are feeling and make you feel that you are wrong.

If you believe that someone is gaslighting you, talk to a therapist to get professional help.