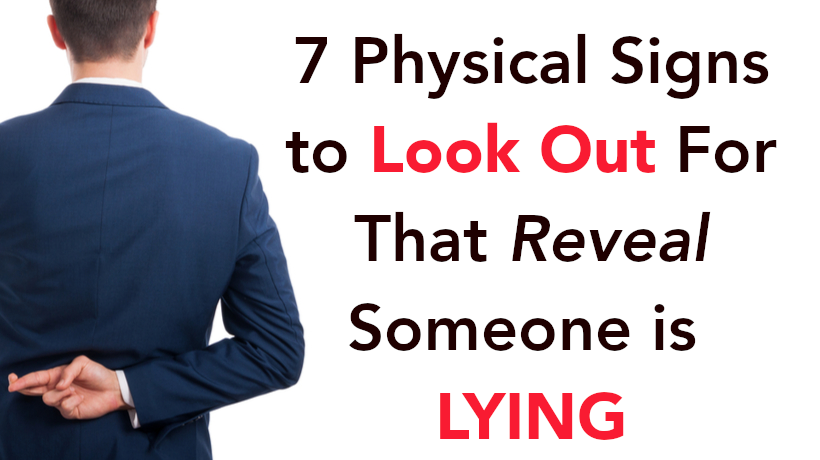 Everyone has been lied to at some point in their life. The thought of being betrayed by the people close to us can hurt, but sometimes it happens. As with a lot of situations, there are red flags to watch out for when you suspect someone is lying to you. Along with verbal cues that someone might not be telling the truth, there are multiple physical signs that can do the same.

The biggest way to tell if someone is being untruthful is to watch their eyes. You’ve probably heard that the eyes are the window to the soul and in a lot of cases, it’s true. According to E. E. Smith, liars avoid eye contact, look down when they’re speaking, or angle their bodies away from whoever they’re speaking to. In a maneuver called “eye pointing”, retired FBI Agent Jack Schafer says, “Liars often look toward the nearest exit, telegraphing their desire to physically and psychologically escape the anxiety caused by lying.”

Self-soothing is the act of touching oneself to try and find a sense of comfort. Dr. Diana Raab says actions like ear tugging, neck touching, collar pulling, or mouth covering may indicate that someone is telling a lie. There is no sure way to tell whether a person who is self-soothing is coming up with a lie or trying to recover from one. However, Smith says that body language is a dead giveaway.

A change in voice can come from a change in emotion, internal state, or just change in pitch. When liars feel threatened, they may get super defensive, their heart may start to race and an outpour of emotions may cause an unintentional change in the way they speak. Raab says even if they’re good at controlling their emotions, a change in pitch may tell when someone is lying and uncomfortable.

According to Schafer, a liar’s “fight or flight” response can make the throat really dry. Throat clearing, hard swallowing, and jaw manipulation are signs that a person is trying to create more saliva. The lack of moisture in the mouth makes it difficult for them to speak a lot without stimulating those salivary glands in the throat. You just might be having a conversation with a truthful person with a dry throat but it’s unlikely if there’s a lot of mouth movement going on.

Where does that moisture from the mouth go when it disappears? It turns into sweat! Schafer says moisture from the throat usually reroutes itself to the skin to escape as sweat. A lot of people sweat when they get nervous and this is no different. Depending on the level of duress the body is under and the amount of stress the liar feels, they could sweat anywhere from a few drops to a whole cup full.

A fidgety person is always suspicious to most people. When someone can’t sit or stand still, people usually take notice and watch carefully. This should be the same response in the presence of a liar. “When pressed for details, they may get fidgety or agitated,” says Smith. Twitching or making movements they wouldn’t usually make (like folding the arms) indicate that a person may be lying or feel as if they’re about to be caught.

A lot of people don’t really notice but liars sometimes make backward movements to put more space in between them and the person they’re speaking to. Schafer says that moving the head back, leaning backward or physically taking a step back can be signs of untruthfulness. “People tend to lean toward the people and things they like, and distance themselves from people and things they dislike,” Schafer says.