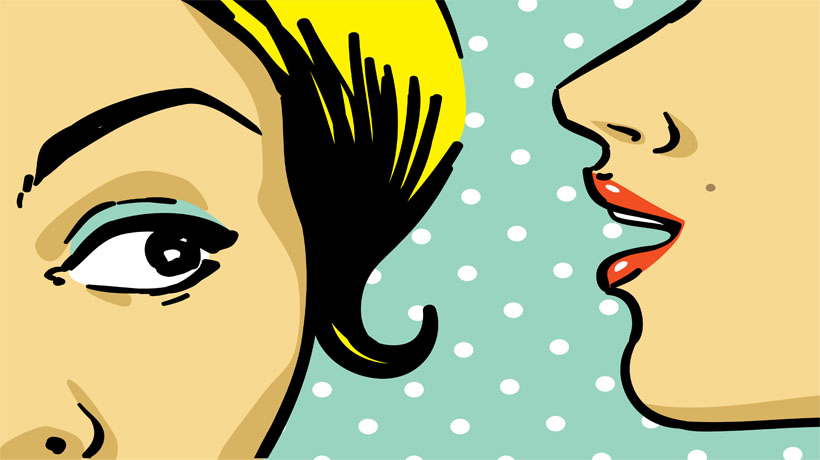 Amongst people that know me, I’m considered to be something of a small talk fiend. OK, maybe that just means that I talk too much, but I take it as a compliment. I haven’t always been this way, and if you don’t believe me, know that my ninth grade English teacher once set up a meeting with me to say “congratulations” on speaking in class. But I’ve found that my quality of life has improved as I’ve begun to speak more—and admittedly, maybe turned into a blabbermouth.

Now, I love small talk and actively seek it out. I’ve realized that basic human interaction has the power to boost my mood and make me feel less isolated. Think I’m crazy? Well, I’ll stop giving my opinion and refer you to the experts instead.

“Small talk is important, particularly now when we have people retreating into their own electronic bubbles, their own worlds, where they can get whatever they want on their own terms,” explains Bernardo J. Carducci, director of the Shyness Research Institute at Indiana University. He adds, “The people who are happiest and most influential have the strongest social network, social capital.”

With small talk, the content of the conversation is essentially of secondary importance. Instead, the interaction is mainly meant to serve the purpose of building social connections and forming bonds with others.

Some people seem to have a knack for small talk. That’s super helpful, and it’ll probably make their lives much easier, but innate skill isn’t actually all that necessary. To master the art of small talk, all you need to do is learn the following basic “dos and don’ts.”

Establish shared interests
The easiest way to make a connection with someone (even strangers) is to discuss shared interests. “The basic premise is that you find common ground with the people with whom you communicate by using the right amount of self-disclosure, empathy and tact,” explains Susan Krauss Whitbourne, Ph.D., a professor of psychology at the University of Massachusetts Amherst. If you’re able to find a topic that you’re both passionate about, the conversation is more likely to take off than if you have nothing in common.

Express curiosity
In any given interaction, if someone says something that grabs your interest or that you would like to know more about, you should always ask questions. Expressing curiosity is a foolproof way to show the other person that you are listening and care about what they have to say.

Avoid “yes or no” questions
“Ask open-ended questions that start with who, what, where, when,” Lynne Eisaguirre, author of several books on the subject, tells CNN. “If you ask these kinds of questions, it keeps the conversations flowing better than if you ask a question that can be answered yes or no.” Makes sense, right? If all it takes to respond to your question is a one-word answer, the conversation isn’t going to last for very long.

Don’t zone out
In all conversations, listening is just as important as speaking. Aim to be attentive in all interactions—it’s a basic sign of respect! Acknowledge what the other person is saying by making eye contact, using their name, not interrupting their train of thought, and nodding when appropriate.

Embrace compliments
Maybe you’ve heard the saying: “If you don’t have anything nice to say, don’t say anything at all.” But what about the opposite? If you have something nice to say, say it. This is actually one of the best pieces of advice I’ve ever received from my mother: She told me that her go-to method for making those elevator chats less awkward is to find something nice to say and express it. Truth is, everyone loves a good compliment. Some of us are scared to give them because we don’t want to seem creepy or weird. But as my mom pointed out, have you ever been upset by a genuine compliment? Yeah, no.

Talk about what you know
This seems simple, but sometimes when we meet new people or talk to someone we don’t know too well, we just go wherever the conversation takes us. Think: Your coworker mentions a film she saw over the weekend, and you respond instinctively with “that movie is awesome!” But shortly thereafter, she asks you what you thought about that one scene, and YOU. START. SPIRALLING. because you’ve never actually seen the movie. Avoid this totally awkward interaction by only talking about what you know.

Be conscious of your body language
Small talk isn’t only about what you have to say, but also how you say it. Avoid crossing your arms or folding them behind your back—body language that could make you seem standoffish. Instead, physically lean in to show interest in the conversation.

Change your mindset
If you’re in a situation where you have to engage in small talk, one of the first things you should do is look at it as an opportunity to make new contacts, rather than as a chore. Approaching the conversation in this mindset will let you be your authentic self and view the interaction as an opportunity for growth.