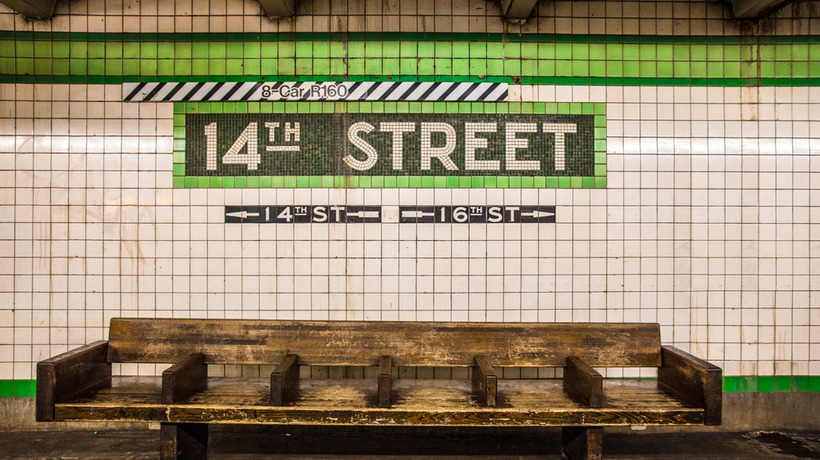 At 8pm on August 28th, 2000, Stewart boarded a southbound train to meet his boyfriend, writer and graphic designer Pete Mercurio. After stepping off the subway at the 14th Street Station, he noticed a small bundle lying on the ground against the wall — a sweatshirt with two tiny legs sticking out. At first, he thought a little girl had left her doll behind. Then he took a quick glance back and saw the legs move.

“I rushed down and loosened the sweatshirt. I’m realizing, ‘A baby’s been left here,’” he recalls in an interview with PEOPLE.com. “I wanted to make sure he was breathing okay and that he seemed to be in good condition. His umbilical cord was still partially intact, so I thought he was a newborn. I thought he might have been injured, so I didn’t pick him up for fear of causing further injury.”

As panic set in, Stewart desperately tried to call out to fellow travelers and get help. But rush hour was over, and the station had all but emptied out. He couldn’t get anyone’s attention, so he ran upstairs to the street level payphone and called 911. When he told the operator he’d found a baby, the police didn’t immediately come.

“I didn’t think they believed me,” says Stewart. His next call was to Mercurio, his partner of three years.

“I picked up the phone and he said ‘I found a baby,’” Mercurio recalls. “Danny doesn’t joke around, the tone of his voice was just so alarming. He asked me to call 911 again and told me where he was, which is one block from my apartment. I said, ‘I’m just going to come down there.’”

By the time Mercurio had arrived, two police officers were on the scene, one of them holding the baby in his arms. “And at that minute, it was just very real, very chilling,” says Mercurio. “We got to watch this miracle in this police officer’s arms yawn and wiggle a little bit. The ambulance was taking forever to arrive, so the police decided to transport the baby in the back of their car. We said goodbye, watched them put the baby in the car and they drove away.”

Mercurio turned to his partner. “You know, you’re going to be connected to that baby for the rest of your life,” he said. “I don’t know how, but someday he’s going to learn about this night and he may want to meet the person who found him.”

Someday came sooner than either could have imagined. Six weeks later, Stewart got a call from an attorney with the Administration for Children’s Services, the child welfare agency in New York City, asking him to testify at a hearing to terminate the biological parental rights for the baby. Afterward, the judge took Stewart by surprise when he asked him if he’d be interested in adopting the abandoned child.

“All eyes are on me,” Stewart recalls. “I mean, this is totally unexpected by everyone, mostly me.” He paused for a moment, and then said yes. Back at home, a terrified Mercurio demanded that Stewart tell the judge he misspoke.

“I said, ‘What were you thinking? How could you say yes? How are we going to make this work? We don’t have any money.’” recalls Mercurio. “‘We don’t have the space. There’s no way we can raise a child in this city. We have nothing.’” But Stewart had made up his mind — he was going to adopt the baby, with or without Mercurio.

“He just kept saying over and over again, ‘This is a gift. We can’t refuse this,’” says Mercurio. “‘We’ll never get this opportunity again.’” Stewart asked if Mercurio would at least go with him to visit the baby in the foster home before he began the adoption process. This was the day that everything changed, for both men.

“Danny held him first. Danny looked at him and said, ‘Hey, do you remember me?’” Mercurio recalls. “It was the cutest thing. After they bonded a little, Danny put out his arms with the baby. I took him and he instantly grabbed my finger. I melted. I realized that we were smart, capable men, and we can definitely make this work. I felt overjoyed that we were going to be starting this family together. I just turned to Danny and I said, ‘This is our son.’”

The couple named their son Kevin, after Mercurio’s parents’ stillborn baby, who Mercurio believes is his guardian angel. “Since I was the next child they had, I always felt that I was being protected by Kevin,” he says. When he told his parents, they broke down in tears of joy.

“How could they have ever in their wildest imaginations predicted that their gay son would have a child and he would name him Kevin, after a baby they lost?” Kevin would turn out to be the biggest blessing of Stewart and Mercurio’s lives.

“Kevin was such an easy kid to raise. I don’t know how else to say it. We got so lucky. He slept all night. He’s always been a very self-sufficient, self-motivated kid who’s really conscientious,” says Mercurio. “He just came to us that way.”

Now, Kevin is 21-years-old and a college senior at a top-ranked college, double majoring in computer science and math. He competes in ultimate frisbee, and is an avid runner.

“Sometimes life hinges on little moments, happy accidents, and miraculous surprises. Sometimes babies are born into forever families. Sometimes they are adopted,” writes Mercurio. “And sometimes, all it takes to find your family is a chance glance at tiny toes wiggling in the corner of a subway station.”