Celebrities Speak Out On Depression: It’s Not Just Sadness 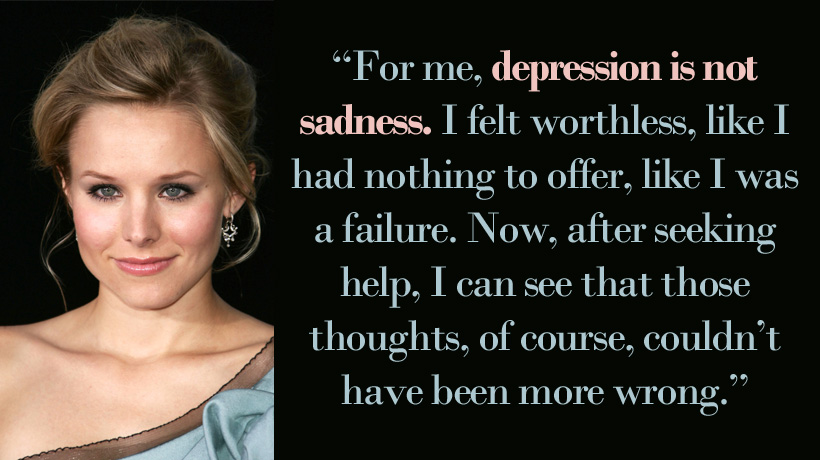 When we see our favorite seemingly perfect, well-manicured celebrities on stage and on the big screen, it can be difficult to imagine that they might ever experience the same emotional struggles the rest of us do. But as it turns out, even fame and fortune doesn’t make us immune to the human condition.

Here is a list of celebs who were vulnerable enough to share their stories about their struggle with mental health.

Jared Padalecki
This former Gilmore Girls star plays the rather emotionally unavailable Dean, Rory’s first love interest. However, this real-life boy next door is full of insight and words of wisdom to share about mental health.

When he was 25 years old, Padalecki was diagnosed with bipolar disorder, depression, and anxiety. He has since been a vocal advocate for charities focused on mental health awareness and suicide prevention, kicking off his “Always Keep Fighting” campaign in March of 2015 by selling shirts with this slogan on them.

Kristen Bell
This ray of sunshine always seems to be making her family, fans, and strangers smile. But despite her peppy exterior, Kristen has struggled with some very dark times, about which she has recently opened up to the public.

In an article published by the Times, she made a statement that “depression is not sadness.”
Instead, it’s an all-consuming sense of despair and isolation and loneliness. It shuts you down completely, and makes you feel like a failure with nothing to offer.

Bell suggests that mental health check-ins should be as routine as going to see the doctor. She has become a huge advocate for the de-stigmatization of depression and anxiety, and thanks to her, many others have come forward about their struggles.

Kendall Jenner
Although her life might seem perfect, Kendall has had her fair share of struggles. She has crippling anxiety, and she wakes up in the middle of the night sometimes just panicked about all of the negativity she has to deal with on a daily basis.

Her panic attacks began in 2016 when her sister, Kim Kardashian, was robbed at gunpoint in Paris back in 2016. That’s why she doesn’t like to go out anymore, and why she keeps a low profile on social media.

Because she has been so publicly open about her anxiety lately, she has created a platform for others to do the same.