Why Classy Women Refuse to Lie in These 5 Situations 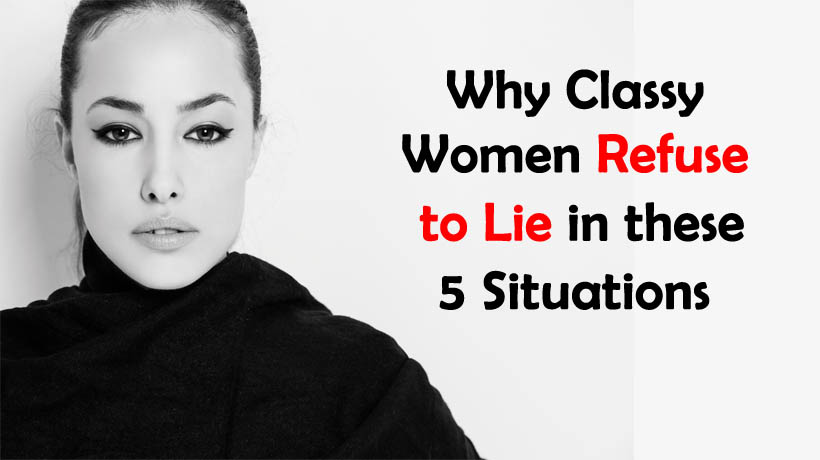 Sometimes a little white lie never hurt nobody when it’s all in good taste (like using a fake name when a guy approaches you). And there are many instances where it’s better to stay silent than to tell the truth (like holding in a secret you’ve been trusted to keep). But here are five times where it’s absolutely vital to be honest, no matter what.

When you need something important from someone
Whether romantically or not, it’s important for women to speak up about their needs. Settling for less or being “too easygoing” doesn’t work. The worst thing you can do is resent someone for not doing something when you’ve never made it known. No one can read your mind.

When something doesn’t feel right, and you strongly disagree
Trust your instincts. If you’re feeling uncomfortable, there’s a reason for it. Too often we regret not expressing our thoughts which would’ve made all the difference.

When you don’t see the relationship going anywhere
If you’ve been seeing someone for a while, but can’t see him in your future, don’t lie about it when he asks you, and don’t deceive yourself into thinking it’ll work if (fill in the blank), because it probably won’t.

When you’ve made a big mistakes at work
We’re all human; mistakes help us learn, grow and hopefully allow us to figure out what we should do differently next time. If you think you can cover up a mistake at work, don’t. Sooner or later, it will come back to bite you tenfold; you’ll realize how much easier it would’ve been if you simply took responsibility. No one’s perfect.

When your credentials aren’t quite right
It’s hard to deny the excitement of finding the perfect house or job online. You want to make yourself sound more appealing to gain an edge over the other applicants, so you exaggerate a few things on your resume or application. If you don’t have the skills or qualifications necessary, let your personality or enthusiasm shine through instead.