Could Your Stomach Pain Actually Be a Peptic Ulcer? 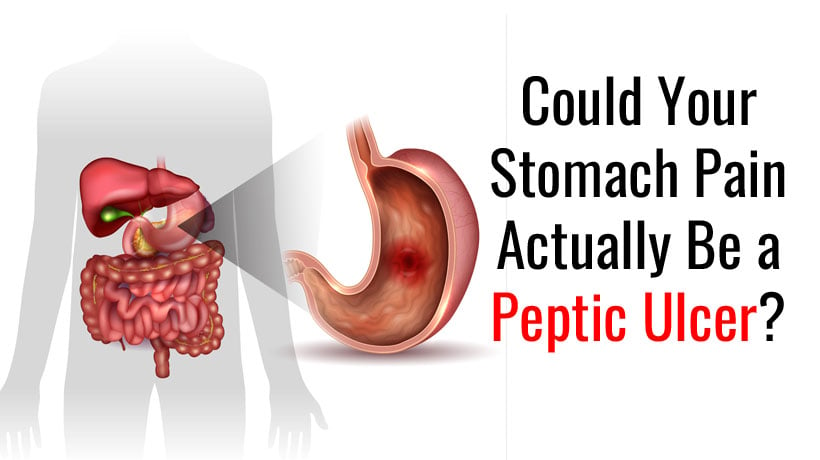 Affecting as many as 1 in 10 individuals in their lifetime and 4 million Americans yearly, peptic ulcers are a (recurrent) problem. Characterized most commonly by a dull, burning pain anywhere between the belly button and breastbone, peptic ulcers are open sores that develop on the inside lining of your stomach (gastric ulcers) and the upper portion of your small intestine (duodenal ulcers). Peptic ulcers umbrella both types of ulcers and can happen to anyone at any age.

Peptic ulcers are most commonly caused by infection with bacteria Helicobacter pylori (H. pylori). Other causes include: prolonged and persistent use of NSAIDs (nonsteroidal anti-inflammatory drugs) such as aspirin, ibuprofen and Aleve; as well as a rare condition known as Zollinger-Ellison syndrome (in which stomach acid is produced in excess amounts). Contrary to popular belief, stress and acidic foods do not cause peptic ulcers but can aggravate them.

Nearly three-quarters of those who suffer from peptic ulcers don’t show any symptoms. Though when they do present themselves, they may include the following:

Burning stomach pain
Pain in the upper abdominal area is a hallmark symptom of a peptic ulcer. The pain can last anywhere from minutes to hours, usually occurring a short while after eating and late at night. With a duodenal ulcer, pain that worsens from eating usually indicates swelling or obstruction of the channel that connects the stomach to the duodenum.

Nausea & vomiting
Though vomiting is a common symptom of a peptic ulcer, vomiting of blood or dark material (similar to that of coffee grounds) is a medical emergency that should warrant an immediate visit to the ER.

Indigestion
Some may report feelings of indigestion or food intolerance that may be resolved after eating foods that buffer stomach acid or after taking antacids.

Loss of appetite
Another associated symptom has been a lack of appetite or already feeling satiated (full) while eating. As a result, a peptic ulcer can lead to weight loss.

If you recognize these symptoms, no matter how mild, it is best to speak to your healthcare professional as your ulcer can worsen over time.