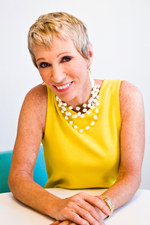 Barbara Corcoran may sit on the panel of ABC’s hit business-themed reality show Shark Tank, but don’t expect to find her snapping her jaws or circling her prey. “I’m anything but a shark,” insists the real estate mogul, business consultant, author, and speaker. “An investor? Definitely. A partner of small businesses? Definitely. An advocate of them? Of course. But ‘shark’? A shark bites!” she exclaims, dismissing the unflattering investor stereotype. “I guess I take a bite out of business, but a shark doesn’t sound like somebody you want to hang out with, does it? It doesn’t sound like somebody you’re going to build a team with, does it? It sounds like somebody who’s going to have a lot of blood and unhappiness in the water. And none of those are things I want in a business.”

“In fact,” Barbara continues, “none of the people I’ve known to be tremendously successful were sharks. They were shrewd – still starts with ‘S,’ so there’s a similarity there – and they were hustlers, and they certainly never stopped swimming. But it’s very hard to build a team unless you’re a terrific leader, and you can’t build a big business unless you have a terrific team.” According to Barbara, animal instinct keeps even land mammals from falling victim to overly predatory business partnerships. “If you’re a bad guy, people see through that, and nobody really wants to work with you for long,” she says. “If you’re a good guy, they rally around your flag, and they support you. Before you know it, you’re being raised up by people who love you—a much more enjoyable way to reach the top than eating your way there.”

So what kind of a team member does this Mama Shark want in her tank? “The number one quality I look for is the ability to take a hit,” Barbara answers without hesitation. “The really terrific people take less time feeling sorry for themselves. Whether it’s a public feeling sorry, like, “Oh, poor me,” or going into hiding, or not reaching out, or feeling injured—it’s poison to success.” Resilience may seem like a tough quality to gauge based on a first impression, but Barbara has honed her instincts based on experience both onscreen and off. “It’s related to passion,” she explains. “Everybody who comes on Shark Tank is loaded with passion. But the difference between short-term passion – when you have a new idea – and long-term passion is the difference between a romance and a 30-year marriage. I’m looking for a passion that can run through the obstacles—the kind of passion that will last a lifetime.”

The kind of passion Barbara describes deals as much with getting the ball rolling as it does with keeping it in motion, and she encourages those feeling stuck or fearful to embrace risk-taking behavior. “The least happy people are never the ones who took a leap and fell,” she professes. “They’re the ones who spend their entire lives wondering what would have happened—the sad souls who feel cheated because they don’t have the gumption to do what they want.” While it’s often said that timing is everything, Barbara advises against waiting for the perfect moment. “I’ve always been surprised by how smart I am once the heat’s under my feet,” she recalls. “Just take the jump. You’ll learn to fly on your way down. But you won’t figure it out standing on the ledge analyzing it.” In short? Whether flying or swimming, this shark wants to see you get moving—or, in her words, “Get off your ass and do it.”

Want more of Barbara? Stay tuned for Part Two of her insights next week! If you’re in the tri-state area, you can find info on Barbara’s upcoming entrepreneur conference in New York City here.