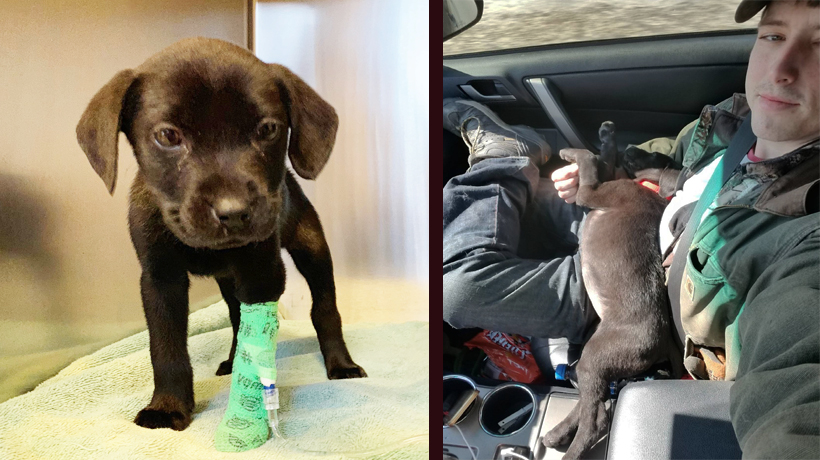 There’s no bond quite like the one between a pet and his owner. Adopting a pet from a shelter forms an even stronger bond, as adoption not only changes that animal’s life, but it can change the owner’s life, too.

Yet there’s no bond quite like the one between Nick Abbott, 31, and his black lab mix Emerson. That’s because Abbott and Emerson are both deaf, yet can communicate through sign language, actions, and love.

“The bond that we have is awesome,” says Abbott in an interview with WABI-5, a local news station in Maine. “We understand each other very well.”

At six weeks old, Emerson and several of his siblings were left in a shelter. From there, he was transferred to a no-kill shelter called NFR Maine. According to their website, NFR Maine is a dog and cat rescue, saving lives from the high-kill shelters in Northwest Florida and placing them in homes in Maine.

But his struggles didn’t end there. NFR Maine’s Facebook page says Emerson struggled for his tiny life through seizures, parvo (a deadly virus that causes gastrointestinal illness in puppies), and hearing loss. The page also shows little Emerson wearing a green cast and feeding tube. Emerson’s siblings were adopted quickly, but NFR Maine says people were reluctant to adopt Emerson because he is deaf.

After NFR Maine posted photos of the happy-go-lucky puppy on its Facebook page, Abbott sent the organization a message. Abbott told them he was interested in Emerson because he had been born deaf and he thought they could relate.

When Abbott and his mother visited the shelter, Emerson immediately walked over and sat at Abbott’s feet.

“That’s all it took. I was sold that this was fate, and these two belonged to each other,” says the post on NFR Maine, describing the adoption story.

Now, Emerson and Abbott communicate with visual commands, sometimes inspired by sign language. When Abbott makes the sign for the letter “S,” Emerson sits. When Abbott pats the floor, Emerson lies down. And when Abbott pulls on his earlobe, Emerson barks.