Demi Lovato is Engaged & Finally Getting Her Happily Ever After 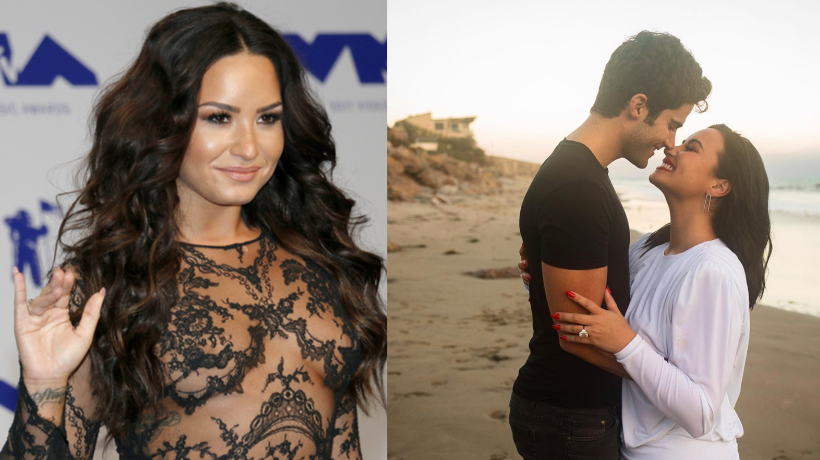 Singer Demi Lovato is finally getting her happily ever after with actor Max Ehrich.

In the past, Lovato had been open about her struggles with her mental health, body image, and drug and alcohol issues. She had an eating disorder at a young age shortly after making her big debut in Camp Rock on the Disney Channel.

Demi has struggled with depression and bipolar disorder for years. She had been in and out of rehab and on July 24, 2018, was rushed to the hospital after a drug overdose.

“I was going to the airport and I had a Sprite bottle just filled with vodka. It was just nine in the morning, and I was throwing up in the car, and this was just to get on a plane to go back to L.A. to the sober living house that I was staying at,” Lovato said. “I had all the help in the world, but I didn’t want it.”

In June, Lovato shared that she had relapsed and released the single “Sober.”

“I’m sorry for the fans I lost who watched me fall again,” Lovato sings in the song. “I want to be a role model but I’m only human.”

Two years later and the singer seems to be on the right track. Demi has embraced her beautiful curves, is living clean and found her soulmate.

Lovato broke the news of her engagement with her friends and fans (and a glimpse of her gigantic engagement ring) on Instagram this morning, sharing photos from the aftermath of Ehrich’s romantic sandy beach proposal.

“When I was a little girl, my birth dad always called me his ‘little partner’ – something that might’ve sounded strange without his southern cowboy like accent,” Lovato wrote in a lengthy caption of the photoset. “To me it made perfect sense. And today that word makes perfect sense again but today I’m officially going to be someone else’s partner.”

“I knew I loved you the moment I met you,” she continued. “I love you more than a caption could express but I’m ecstatic to start a family and life with you. I love you forever my baby. My partner. Here’s to our future!!!!”

The couple’s engagement months after they were first rumored to be romantically involved back in March. Their love story began with some flirting over social media, but things may have gotten serious when Lovato and Ehrich quarantined together early on in the pandemic. Four months later the two are planning to spend the rest of their lives together.

Ehrich wrote a beautiful caption on his photo for Lovato, “You are every love song, every film, every lyric, every poem, everything I could ever dream of and then some in a partner in life. You are the most beautiful inside and out in the entire world & I couldn’t be more grateful God brought us together.”

We are so happy for Lovato and wish the two the best.