Do Opposites REALLY Attract? (According to Psychologists) 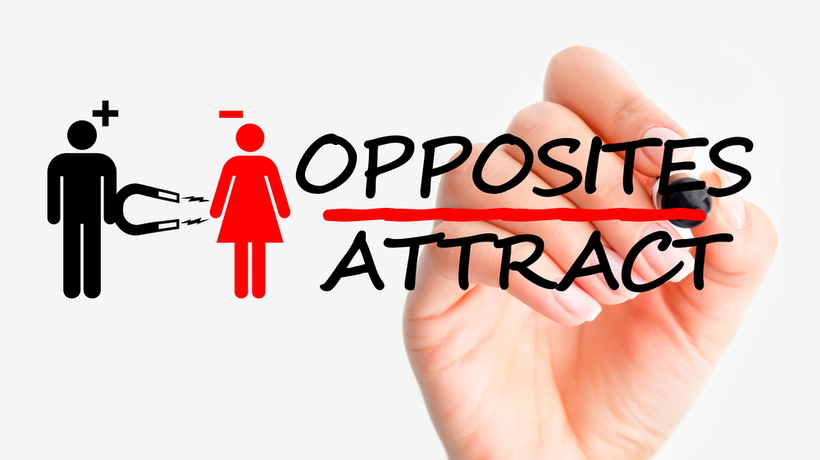 For a very long time there’s been a question of people being attracted to their complete opposites. Whether it comes from science or just everyday experience, some people truly believe that opposites attract while some are completely against the idea. Here’s what a few psychologists have to say about theory:

“It depends on how they interact.”

Dr. Gwendolyn Seidman, Ph.D. says that sometimes actions speak louder than personality. She stated that most research indicates that people affiliate with people who share their same values and interests. On the contrary, when it comes to personality traits, that’s when things start to get complicated. Dr. Seidman described this idea as complementarity, which means some people like personalities similar to theirs while others prefer their opposites. In that sense, Seidman says that people prefer someone who is similar in mindset but opposite in dominance.

In a similar article, Dr. Vinita Mehta, Ph.D., said that “birds of a feather romantically flock together.” However, she analyzed a study by researchers Nathan Hudson and Chris Fraley that stated although people usually pursue relationships with people similar to themselves, those factors do not determine their happiness in the relationship. Instead, they concluded that stability and satisfaction in a relationship are based on how similar each partner perceives the other to be. Regardless of if they are actually similar or not, Hudson and Fraley say that if each person believes their partner has the things they are looking for, they will be satisfied by their connection.

According to Dr. Jennifer Verdolin, Ph.D., and Medical Assistant Kristine Keller, opposites just don’t have a comfortable place in your life. Keller believes that opposites only really attract on the surface and that friendships are a good way to tell that opposites don’t usually connect. Dr. Verdolin used a study of animal behavior to prove her point. In this study, animals pick relationships based on very similar traits like personality. Because we are animals in a sense, Verdolin argues that we hold the same system of determining who to be friends or mate with.

“…nothing can be farther from the truth.”

One person who is completely against that idea that opposites attract is Dr.  Clifford N. Lazarus, Ph.D. “Compatibility and genuine long term intimacy are usually based on similarities, not differences,” Dr. Lazarus said. He gave four major zones of compatibility that he thinks need to be very similar in order for the relationship to survive: world view, basic activities, sexual relations, and temperament. Without having similar views on each of these categories, Lazarus says there is room for conflict and dissatisfaction.

So do opposites really attract?

It’s a very complicated question to answer. One thing that each psychologist above could agree on is that extreme differences just don’t work.  Even though Dr. Lazarus believes picking your opposite should be completely avoided, the others could see how small differences could be overlooked—or possibly changed into similarities over time. Dating someone with different qualities as you is all about the balance you can find in that relationship. Without the similarities, it might be hard to bond on a deeper level. However, without slight differences certain people just wouldn’t be able to find excitement in their relationships.