Do You Sabotage Your Relationships Based on Your Zodiac Sign? 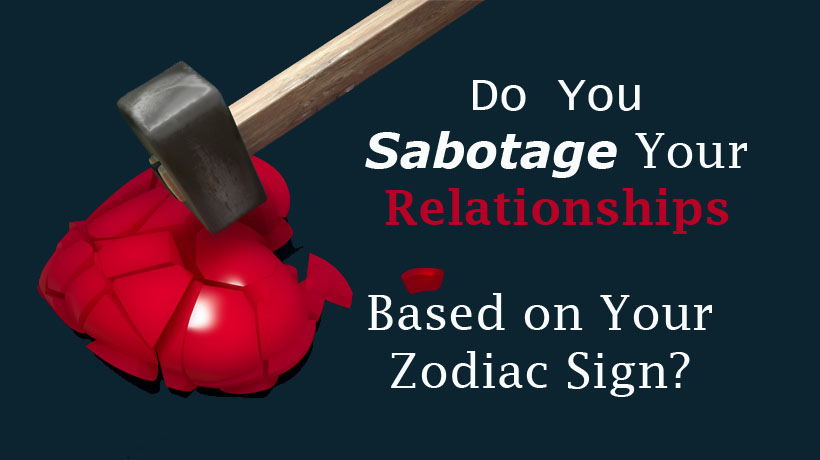 Whether you’ve leaked a secret about a friend or chose to not believe someone who was telling the truth, most of us have ruined a relationship or two without proper reason. Sometimes people do deserve to get the boot, but here’s how you can find out if you’ve taken part in some unwarranted damage.

Aquarius (January 20th-February 18th):
While one of your favorite pastimes is spending time with friends, your need to be independent can cause you to push people away. You hate being lonely, yet hiding your emotions is your forte.

Pisces (February 19th-March 20th):
You never intentionally sabotage connections with people because you have an undying trust for others. However, having too much faith is a very common reason for heartbreak and keeping your guard down can lead to self-sabotage when the wrong person takes advantage of your kindness.

Aries (March 21st-April 19th):
Your impatient nature causes you to write off people easily, which prevents you from forming new connections. You’re always enthusiastic and willing to meet people, but when it comes to building a trust you tend to give up prematurely.

Taurus (April 20th-May 20th):
You’re a very dependable person who likes to stick to a routine, which allows you to maintain stress-free relationships. People know what to expect from you, and although you can be stubborn at times you always make sure to pull back in order to save the connections you’ve built.

Gemini (May 21st-June 20th):
Despite your best interests, your lack of focus can sometimes cost you your relationships. When you try to keep up with too many relationships at once, you can lose sight of what’s important. You may not intentionally burn bridges, but it’s necessary to learn who in your life is worth fighting for before you lose them.

Cancer (June 21st-July 22nd):
You have a big heart and you’re not afraid to show it. But your inability to trust your most recent friends often causes you to make the wrong move. Don’t hesitate to let people in – when you let your guard down, people cannot remain strangers for long.

Leo (July 23rd-August 22nd):
People can be afraid to get to know you and even though you crave the company of others, your unwillingness to let others win will jeopardize any connections you make.

Virgo (August 23rd-September 22nd):
You’re a very modest, shy individual who will likely let others end a relationship before ever considering confrontation. It’s great that you don’t push away those who don’t deserve it, but don’t let people take advantage of your quiet nature.

Libra (September 23rd-October 22nd):
As a Libra, you’re a silent attacker – you despise conflict while you also can’t help but hold a grudge. You’ll find sneaky ways to end your relationships in order to avoid uncomfortable discussions, but no one will ever believe that you “sabotaged” them due to your thirst for justice.

Scorpio (October 23rd-November 21st):
On the outside, you’re the friend that everyone wants to be, but people don’t know that you’re actually quite secretive and will do anything to keep from being played. You truly cherish your friendships, but you’re quick to cut people out before they can hurt you. Be careful not to de-friend the wrong person.

Sagittarius (November 22nd-December 21st):
Similar to all of the Leos out there, you may not try to destroy their relationships, but your character can make people hesitate before getting to know you. You’re known to drive people away with your blunt language and impatience, which may not be intentional sabotage but sometimes it might as well be.

Capricorn (December 22nd-January 19th):
You’re extremely close with your family because you can expose your distrusting nature and they’ll always love you. Other people, on the other hand, might be turned off by your endless opinions so make sure at least some of them are positive ones to avoid deterring people away.