3 Ways to Deal with a Stressful Boss 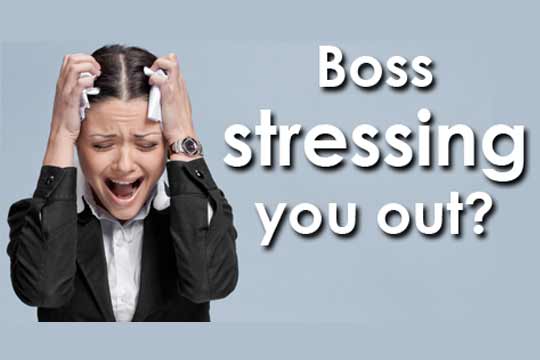 My client Drew had been a star in his company for five years. That all changed when he got a new boss who seemed determined to undermine him anyway he could. If you were in that situation, how stressful would it be for you? You might think that’s a ridiculous question, thinking, “Of course, that would be incredibly stressful for anyone.” Most people would agree, but it doesn’t mean it’s true.

The truth is, what we call “stress” is subjective. What overwhelms one person energizes another. We forget when we’re under a lot of stress and instead assume the amount of stress we’re experiencing is due to an outer circumstance and that it has nothing to do with us. As a former psychotherapist and now as an executive coach and life coach, I’ve seen over and over again that’s not true. We create more stress for ourselves than we realize.

Most people don’t believe that. We’ve been taught and conditioned to believe that if something “bad” happens, it’s normal to feel “bad” as a result. And while it might be “normal,” that doesn’t mean it’s the way it has to be. For instance, everyone has heard about Post Traumatic Stress but few know anything about Post Traumatic Growth. The fact is, some people are resilient in the face of challenge and tragedy while others seemingly collapse under the same situations.

On my first coaching call with Drew, he was in a downward spiral, not thinking clearly and he believed the amount of stress he was experiencing was all because of his boss. Drew wasn’t sleeping well and he found himself becoming more impatient with his team at work and his family at home.

Drew needed to turn things around as soon as possible, so in our second coaching conversation, I asked him an uncomfortable question: “Is it possible you’re creating unnecessary stress for yourself—or do you think your boss is creating all your stress?” Drew thought I was crazy and was offended. Then there was silence for a full two minutes. That’s when Drew hung up on me. To his credit, Drew called me the next day and we began working on eliminating most of his stress.

If you want to do the same, here’s three ways to do that:

Shift your self-talk:
The truth is most people don’t pay attention to their thoughts and beliefs when things are going well and they’re even less likely to do so when things aren’t going well. However, we “talk to ourselves” about everything going on around us. For instance, here’s what Drew was saying to himself about his situation: “This isn’t right.” “I can’t win here—my boss has all the power.” “My boss is a jerk.”

Of course, Drew was in a tough situation and it wasn’t right or fair. The problem is that’s what Drew thought about constantly. That is, until he learned to shift his thinking from “This isn’t fair” to “This isn’t fair and now I’m going to focus on what I can control.” That thinking empowered Drew and eliminated half of his stress.

Take your power back:
For Drew taking his power back began with seeing he was making himself miserable because he believed his boss had all the power. It’s true his boss had a lot of power but he didn’t have the power to choose Drew’s thinking and beliefs for him. Drew was telling himself he had done all he could do and nothing worked—so he felt powerless. I coached Drew how to question his beliefs and that enabled him to be more flexible in his thinking. With his newfound mental flexibility, Drew discovered solutions.

If you believe that someone else or your situation is the real problem, that thinking is really your problem. James Allen said long ago, “Men are anxious to improve their circumstances, but are unwilling to improve themselves; they therefore remain bound.” The day we quit wishing for our circumstances to change and commit ourselves to learning, growing and transforming is the day we take our power back. Isn’t that exactly what Nelson Mandela taught us?

Take action:
When we’re “under a lot of stress” the fight or flight response kicks in if we’re not paying attention. Drew had been so angry at his boss he alternated between “fighting” with his boss and doing his best to avoid him. The problem was both of these behaviors only made things worse. I asked Drew, “You can’t control your boss, so what is within your control that might make things even a little better?”

Drew realized he had quit exercising six months ago—about the time his boss entered the picture. He knew that now was the time to take better care of himself, so he began to exercise again. That one change made him feel more in control of his life and that in turn enabled him to be more flexible and creative in dealing with his situation.

Taking positive action always improves our situation, even if it doesn’t directly change it. It changes us and unleashes the power we’ve had all along. Now, instead of creating stressful energy, we’re creating empowering energy and we can use that to continue improving the situation we want to change.

The next time you tell yourself “I can’t change this” (whatever “this” is) or “I’ve done everything I can” realize while that might feel true, it’s not true. What can you do today that may seem small and insignificant but will eliminate more of your stress?