Experts Weigh in on Body Language, Signs that Mean They’re Into You 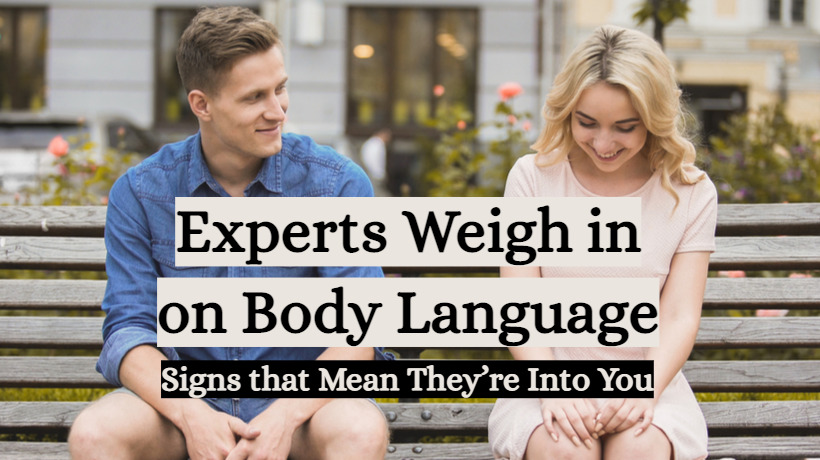 In this day and age, it can be difficult to determine if someone truly is into you without them explicitly telling you. Reading someone’s actions and words can often be cryptic and leave you more confused on how to proceed with your relationship.

Certain actions, phrases, and looks are universally seen as flirtatious, but we may not always pick up on it in the moment. Nonverbal communication experts say these signs in both men and women can indicate if someone is flirting with you.

Having an open and relaxed posture

In both men and women, having your arms or legs crossed in front of you can indicate that you are not open or welcome to the invitation. A man who speaks with a relaxed posture can indicate not only self-confidence but is a clear invitation to conversation. One study even found that men who held open postures got more offers from women in a speed dating setting.

Studies have also found that men who take up maximum space with their postures or gestures (talking with their hands, moving around, etc.) are generally found to be more attractive as opposed to being more withdrawn. Maximizing space is typically a sign of self-confidence, and they may be more “visible” to those around them. It may also be more inviting to potential partners. Opening the space up between two people can make for more comfortable energy.

Having an assertive demeanor

A man who appears to be “in control” of his surroundings exudes a relaxed and almost suave energy and demeanor. Holding little to no anxiety demonstrates a strong control over his life and his circumstances and it’s a strong indicator to potential partners that he can handle anxiety or challenges.

Having a coy smile

A coy smile is quite different from a regular, relaxed smile. Although there may be some shyness behind it, it is an open signal that you are “vulnerable” to them. This kind of smile may also be more intense if there is consistent eye contact between two individuals.

A typical hair toss may seem a bit juvenile to some, but it actually holds a deeper meaning to it. Flicking your head back as if you are throwing your hair back can signal almost a “grooming behavior”, suggesting that you are “fixing” or “grooming” yourself for this other person. Hair is almost always a defining feature on women, so it not only catches someone else’s attention, but it allows one’s pheromones to exude.

A woman may softly touch her neck, thighs, face, or any exposed part to signal availability. On a deeper level, it is a sign that they wish to be touched or massaged.

Exposing the inner part of the wrist.

While not the most well-known signal amongst body language signals, exposing the inner part of the wrist suggests approval and vulnerability.

There are very distinguishing body language signals between men and women, and if you are open to them, you may be able to pick up on some of them. Positivity and one’s tone of voice can also be a signal that they are into you, and this can be seen in both men and women.

When flirting, women may have higher tones of voice while men oppositely have lower tones. When courting or dating, women will keep almost a “childlike” or higher tone of voice that triggers a protective nature in men. While this may seem paternalistic, it is also just an indicator of stronger masculinity.

When engaging in conversation in the courting stage, it may be difficult to keep the momentum going and not make it awkward or uncomfortable. Research on seductive, nonverbal body language suggests that nonverbal cues must be received as positive or pleasant.

For most of these cues, they may be the product of evolutionary or behavioral traits, with women being perceived to be vulnerable and youthful (an indicator of fertility) and men typically being perceived as the paternal, protective one through assertive and dominating body language cues.