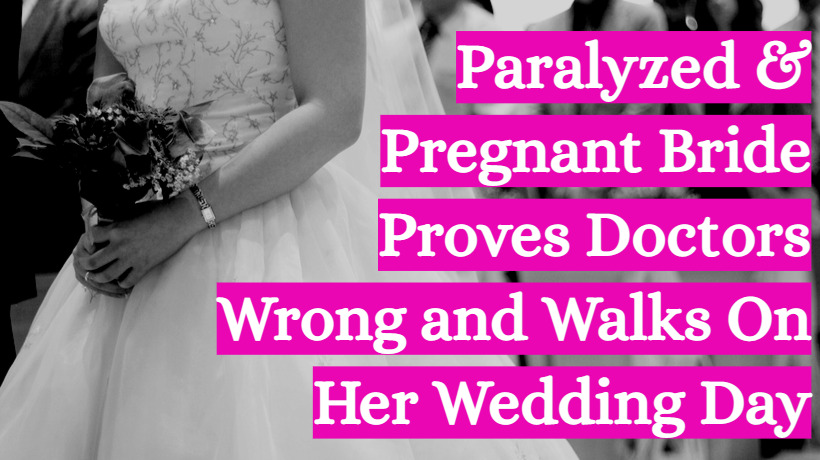 When doctors told Brittney Hitchcock that she would never walk again after a horrific ATV crash left her paralyzed, she knew that she had to prove them wrong. Now, nearly 4 years later, the pregnant mother of two can say that she has.

To the amazement of her new husband and her family, the 26-year-old walked down the aisle at her wedding on Saturday.

“Seeing her walk down the aisle, it was amazing,” Glen Hitchcock, Brittney’s new spouse, recalled on Monday’s episode of PEOPLE (The TV Show!).

“Every type of emotion came to mind at that time, and it was just so amazing to see her walk all the way there and back with me… It was just the best thing in the world,” her said.

The pair became engaged in 2019, a year and a half after they began dating. Brittney said that Glen’s proposal was a driving force for her to get better.

“That’s when I knew that I had to get better, to get out of that hospital and figure out what I want to do for my wedding,” she explained to PEOPLE. “It was important to me because I got to watch my sisters walk down the aisle with my dad, and I knew I really wanted to do that.”

The road to recovery was long and arduous. But after several surgeries and one nasty infection, Brittney was discharged from her hospital bed and began physical therapy. Mentally, the healing process was difficult, and she admits that there were many times she had difficulty staying motivated.

“I wanted to give up, but there are so many paraplegics out there that are doing exactly what I’m doing. And some of them are further along than me, and they inspire me to do better for myself and my family,” she said to PEOPLE.

She also explained how Glen’s support kept her going the entire time.

“Glen pushes me as hard as he can, and I really appreciate all the comments and stuff he gives me. He’s a really great helper and a lover. He just does it all.”

Although there were times that were tense, the hard work eventually paid off when Brittney walked down the aisle with the assistance of a walker.

“I cried more, and I think there was a lot more tears that day,” she recalls. “But the day of the wedding was a lot. It went smooth, but it was still nerve-wracking because I was in a longer dress and I had a veil on,” she said, recalling the milestone.

“And there were more people staring, and then when I looked out to the crowd they all had tears in their eyes and I just felt amazed that they were all there for me and Glen,” she said.

Moving on, the couple is looking forward to welcoming their first child together. They both each have sons from previous relationships. Brittney also continues to keep working on her walk.

“It’s crazy. I didn’t think I would get this far,” she said. “I think if I keep going, I think I’ll be able to walk. I may not walk normally, but I would be able to walk longer than walking down the aisle.”