Five Signs of an Imposter who can’t be Trusted 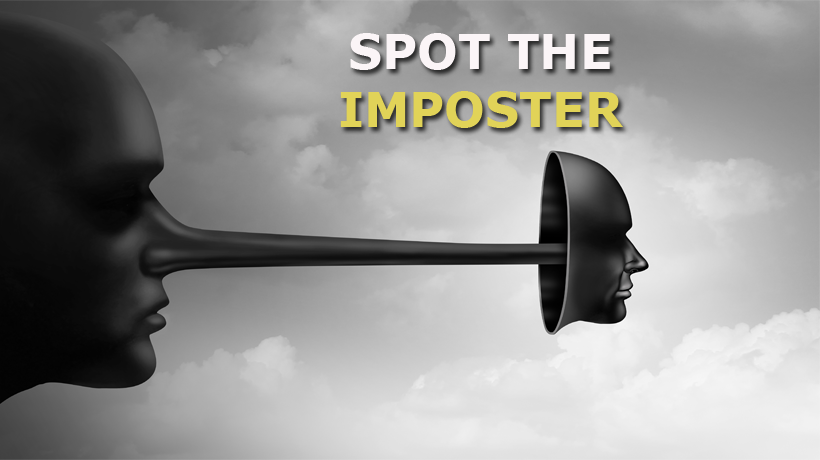 Some people really can be imposters! They say they can deliver but they don’t, or they say they’ll be there for you but they’re not. They say they have a certain background but they are lying. They are a ‘fake’.

Someone who is an imposter is inherently untrustworthy because they misrepresent themselves. They are trying to show you one thing while inside they are feeling and motivated by something else.

It’s better to be able to read the signs and protect yourself than to suffer the consequences of having trusted them and been burned.

Here are 5 signs someone is an imposter and how to handle them.

1 They say one thing do another
You might know people in your life who are ‘all talk’ but no action. Notice if you find yourself getting excited what they promise to deliver (e.g., an introduction, purchase something from you, an offer to take you somewhere), but they repeatedly fail to come through.
With someone who makes big promises, you want to track whether they deliver or not so you know whether they are the ‘real deal’ or not. With this kind of person, you want to manage your expectations so as not get your hopes up or waste your energy. But if you want to keep the friendship or family relationship because you feel nourished by the person in other ways, have zero expectations that they will deliver.

2 It’s “All about them”
If a person’s speech is full of references about themselves it reveals they have some traits of a narcissistic personality. These personality traits make someone less trustworthy than others because they are insecure inside themselves and may revert to controlling behavior, putting you “one down” so they can feel “one-up”, or making it ‘all about them’. They will say things to make them seem even more successful or important than they are. It’s important to be aware if you are caught up in an interaction with a narcissistic personality because you are at risk for being made to feel bad about yourself, even though the person’s comments have much more to do with themselves than you. Remember that their actions reflect that they feel like a fraud, and are not a reflection of your abilities or how valuable you are.

3 They Externalize Blame
Some people tend to think that the other person is at fault and don’t see their role in any situation. If the other person doesn’t take responsibility for their part in an interaction, then by definition they are blaming you or other people. Someone who deflects attention away from themselves and onto other people is generally defensive. They don’t want to admit that they could have done things differently or don’t have what it takes. You might want to reduce the time you spend with them. Don’t internalize the blame they assign to you (“That’s helpful to know that you are thinking I had something to do with it. Let me see if I can provide some context why that’s not the case”) Or if you are going to ‘call them out’ on their behavior do so respectfully.

4 Their body language suggests they are untrustworthy
You often pick up cues from other people’s body language that may not even register with you consciously but will give you the information you then want to check out further by watching their behavior over the interaction.

When people don’t sustain eye contact we generally think of them as ‘shifty’, meaning they are not being honest with you. There is also a convergence of 4 body movements that together suggest someone is untrustworthy: Hand touching, face touching, crossing arms, and leaning away. If you see a person doing these postures or body movements you might intuitively get a sense to trust them less (research validates your intuitions). Once you get that ‘intuitive hit’, think twice about how much you give that person before you see some reciprocity.

You can try to model body posture that conveys trustworthiness such as an open stance, eye contact, and a genuine smile. If the person mirrors you, they might be more open to building trust with you than you thought.

5 They sound fake or their words feel forced
Just like you tell yourself to ‘fake it til you make it’, other people might be doing the same thing. You can often pick up a ‘feeling’ or intuition about someone and whether they really have the substance that they say they do. Sometimes people say things to ‘get a reaction’ but they don’t really mean it or can’t support it with their own original thoughts (they run out of things to say if you express interest or question them back). Similarly, if a person’s language is ‘over the top’ effusive or they get too close to you too quickly, pay attention.

In today’s world where everyone compares themselves to others via social posts, and competition for opportunities is high, people who don’t feel they ‘have the goods’ often try to borrow from or even take down the real talent of capable women like you. It’s important to check in with yourself about how it feels to be around that person and whether they are showing interest in how you feel not just trying to control you.

The most important take away is to TRUST YOUR OWN INTUITION, even if you can’t exactly ‘put your finger on exactly’ what feels not trustworthy about the person. If your skin crawls when someone is talking, be aware. If you have a 6th sense that there is something ‘off’ about this person, go slow to engage with them. If you have a physical feeling of hesitation in your body, prioritize your own safety over any gendered conditioning to ‘be nice and play along’ with someone who might be dangerous or not empathic to how you feel and what you need.

The points in this article in part, come from the writer’s experience.