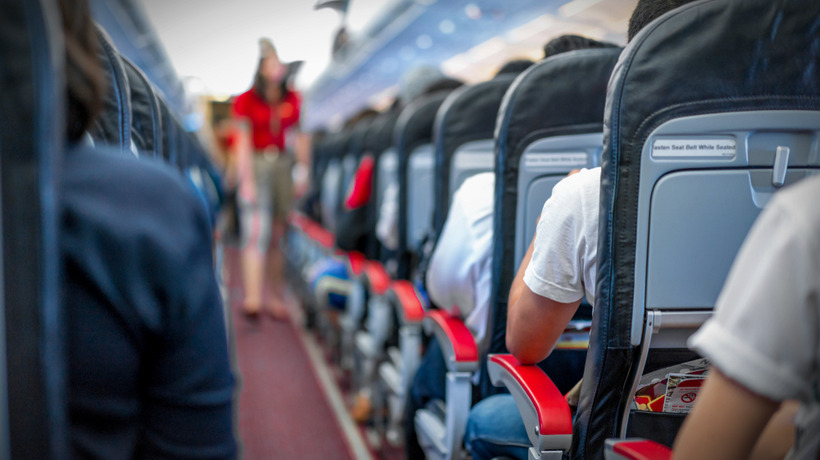 An American Airlines flight from New York City on its way to California Wednesday evening made an emergency landing in Denver after a flight attendant was physically attacked by a passenger midway through the trip.

The airline said he punched a female flight attendant over his refusal to wear a mask. Witnesses told local reporters that the man had been drinking and had to be restrained with duct tape.

In a photo tweeted by passenger Mackenzie Rose, the assailant is seen handcuffed and wearing a mask in Denver International.

“I understand that they actually punched her twice,” one passenger told local media. “I did see her walk back down the aisle afterwards. She had blood splattered on the outside of her mask.”

According to CBSLA, The flight attendant was taken to a local hospital to assess her injuries. The airline did not provide further details regarding her status to respect her privacy.

American Airlines said that the company is “outraged by the reports of what took place on board” in a statement.

“The individual involved in this incident will never be allowed to travel with American Airlines in the future, but we will not be satisfied until he has been prosecuted to the full extent of the law,” the airline said.

The incident occurred at a time when commercial airlines have noticed a sharp uptick in disorderly passengers, many of whom refuse to comply with mask requirements onboard flights. According to a national survey of nearly 5000 flight attendants released this summer, over 85% of respondents said they had had to deal with unruly passengers so far this year. 17% reported experiencing a physical incident.

Assaulting a flight attendant is a felony and can result in up to 20 years of jail time.

“This behavior must stop, and aggressive enforcement and prosecution of the law is the best deterrent,” the statement from American Airlines continued.

“We thank our crew for their quick action and professionalism to ensure the safety of their fellow team members and customers on board. Our thoughts are with our injured flight attendant and ensuring that she and her fellow crew members have the support they need at this time,” the statement ended.