Get the Recognition You Deserve 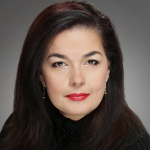 As a young, tenacious woman raised in Rio de Janeiro, Ana was ambitious. She studied law and economics, and had a successful career in South America. But she wanted to play in the global arena, so she came to the U.S. and enrolled in the Kellogg Graduate School of Management to pursue her MBA. Moving to the United States was a huge change and while Ana faced some major challenges in the process, from adapting to the weather to missing her family and friends, she didn’t let anything stop her from achieving her goals.

“I think everyone has a little intruder that comes into their mind that makes them second-guess themselves,” said Ana. “I reminded myself that I wasn’t admitted to the school by mistake. I was accepted because a very competent selection committee read my application, looked at my grades, my experience and skills set and said that I was a qualified applicant.”

Ana recalled, “I remember going to the first week of classes, coming back home and saying – I’m not going to be able to finish this, this is too hard and I can barely understand what the professors are saying.” But, Ana didn’t let that stop her. She reached out for support from her professors and colleagues and got it. By observing her successful classmates and getting advice from her professors, at the end of the year she had more job offers than any other student in the program.

Today, Ana is the President and CEO of one of the country’s oldest and most prestigious business forums, The Executives’ Club of Chicago. She is also a triathlete, yoga practitioner and the mother of three beautiful daughters. She believes that in order to be successful, you need to get the recognition you deserve. One way to do this is by picking the right issues to fight for. If you make every little thing a big deal, it takes away from the things that really matter and creates unnecessary drama. In her words, “These drama kings and queens create negative energy, decrease productivity and just make everybody feel down.”

Ana advises us to get our priorities straight in the workplace and within our daily lives.

Adapted from Helene’s radio show, Dare to Live Fully, episode: Get the Recognition You Deserve.