Here's How to Identify a Psychopath By the Way They Talk 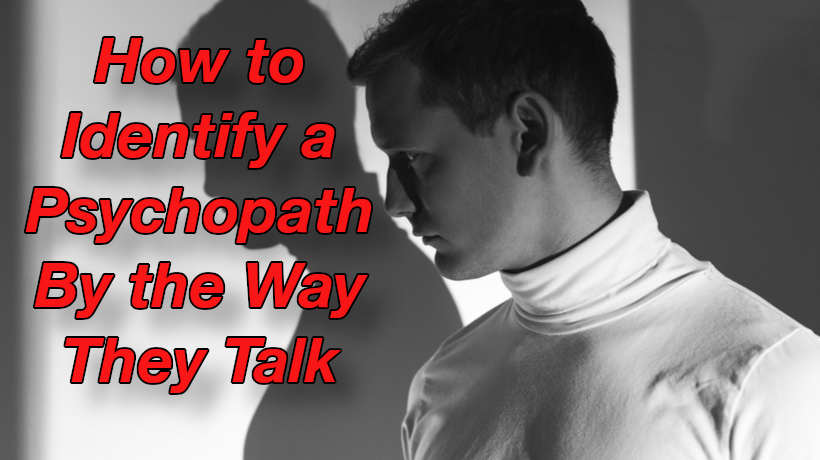 According to Robert Hare, whose checklist (PCL-R) is often used to assess psychopathy, psychopaths can be charming, impulsive, deceptive, lack empathy, have a limited and shallow emotional experience, and get bored easily.

They speak in past tense

Psychopaths use more past-tense verbs than other people. Most of us would say “I think this is a good idea” but a psychopath is most likely to say, “I thought that was a good idea.” According to research by Jefferey Hancock, the lead researcher and associate professor in communications at Cornell University, this is an indicator of psychological detachment.

Their language lacks an emotional dimension

When speaking, psychopaths will not get their emotions involved. They lack empathy, so they have a shallow emotional experience. They can say emotional things back to people, but their facial expressions don’t match their words. Their feelings are learned behavior. “In lay terms, psychopaths seem to have little or no ‘conscience,’” say researchers in a study published in the journal Legal and Criminological Psychology.

They are overly charming

Psychopaths will talk more emotional words in an attempt to gain attention and admiration. They are really good at saying the right thing at the right time to play with people’s emotions and get what they want. Using the right words may lead people to give them money, voting them into office, or hurting them. Because of their interpersonal prowess, they give goof first impressions and can function successfully in society.

Psychopaths always want control, even in their conversations. They will make sudden shifts in the subject of conversation when they don’t feel in control. They also speak in a controlled manner, slowly and quietly. Researchers suspect they craft this calm demeanor intentionally because it helps gain control. Their tone remains neutral and unemotional.

Talk about life in terms of cause and effect

Psychopaths talk about their behavior in terms of cause and effect. Rather than show remorse, a psychopath is likely to justify their actions. According to research done by Hancock, using computer programs to analyze what murders said, they found that those with psychopathic scores showed a lack of emotion, spoke in terms of cause and effect when describing their crimes.

Focus attention on their basic needs

If a psychopath ever talks about their needs, they talk about their biological or material needs like food and money, not what they need socially or emotionally. A psychopath who confesses a murder, for example, will talk more about what they ate for lunch and financial gain, rather than their behavior. To them, their basic needs are more important than higher-level needs like family, religion, spirituality, or self-esteem.