What Happens Mentally & Emotionally When There's a Long Break in Intercourse 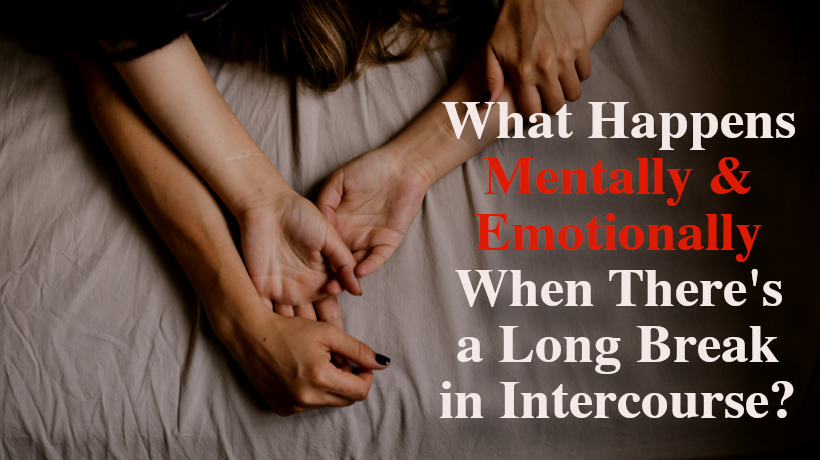 Being stuck at home may make it more difficult to be intimate with your partner. If you are single and used to being intimate with people, it may have been at a sudden halt for a while. Or you may have been out of a relationship for some time, whatever the cause, changing your intercourse habits can have important effects on not just your body, but your mind. Here are some changes that can occur mentally and emotionally from a lack of intimacy:

Not being as intimate with your partner is obviously going to impact your relationship. You may feel less connected to them, especially if not having intercourse means that you spend less time with them overall. According to research by Stuart Brody, Professor of Psychology at Charles University in Prague, intercourse may be correlated with higher levels of trust, intimacy, and love in relationships. So less intimacy could leave you feeling less trusting and loving with your partner. Dr. Broday’s research also says there could also be a relationship between physical intimacy and your capability of perceiving, identifying, and expressing emotions, which could cause extra strain on your relationship.

It can affect your overall mood

Certified sex therapist Sari Cooper says that “Skin-to-skin caressing and touch and can help to regulate one another’s moods,” usually through the release of oxytocin, a hormone associated with good feelings and better sleep. Being physically intimate also releases oxytocin and endorphins into the body, hormones related to stress management. And while psychologist Ryan Anderson says that physical intimacy can act as a natural antidepressant, studies don’t indicate that a decrease in this activity will cause clinical depression.

It can decrease your memory

Research has found physical intimacy to be associated with memory. A study published by Oxford University Press on adults ages 50 to 90 had better memory if they were more physically intimate. A 2017 study published in the Archives of Sexual Behavior on heterosexual women showed that more PVI was associated with better performance on tests centered around the hippocampus, the part of the brain that deals with learning. Even just thinking about being intimate, according to Dr. Anderson, increases analytic skills, and having intercourse can involve up to 30 areas of the brain. (Playing Sudoku uses a fraction of that.)

There could also be benefits

If you feel that not having intercourse has actually had a positive effect on your mental health, you may want to reassess what role physical intimacy played in your life before. Susan Krauss Whitbourne, Ph.D., a Professor Emerita of Psychological and Brain Sciences at the University of Massachusetts Amherst, says that “Hookups pose a significant threat to the physical and psychological health of young individuals.” Being at a higher risk of contracting sexually transmitted diseases and having intercourse without emotional intimacy can take a toll on a person’s mental state. Research shows that more hookups can increase depressive symptoms or loneliness because of this.

If you are missing your intimacy, certified sex therapist Janet Brito suggests replacing the time you would have spent being physically intimate with a new activity. Try finding new ways to become more emotionally intimate with your partner now that your physical contact has been reduced. You could also spend the time on yourself, getting in touch with your emotions, or engaging in a new stress-relieving activity.

Healthline Effects of not having sex

NYPost What happens to your body when you stop having sex

Healthline The Health Benefits of Sex