How Do You Deal with Toxic People Based on Your Zodiac Sign? 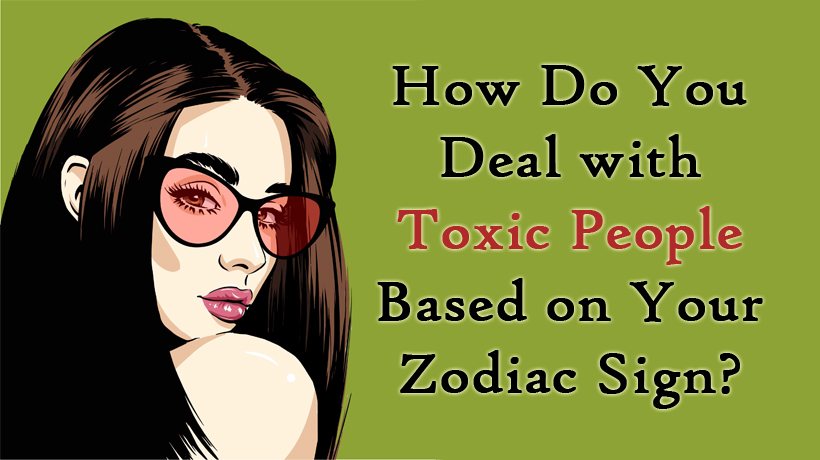 It’s never easy to handle difficult people, but here are some tips according to your sign.

Aquarius (January 20th-February 18th)
Since you’re so in tune with people as a whole, you feel out of touch the moment you focus your energy on one individual. The same applies when it comes to dealing with difficult people; you don’t.

Pisces (February 19th-March 20th)
Your compassionate nature makes you want to understand the behaviors of toxic people so you can “rescue” them. You feel that no matter how much negativity you absorb from them, you’ll want to try to understand what’s causing their harmful behavior.

Aries (March 21st-April 19th)
You pride yourself on your competitive streak – and your aggressive nature surfaces when dealing with toxic people. You won’t hesitate to put these people in their place, especially if they’re causing your loved ones distress.

Taurus (April 20th-May 20th)
You’re social by nature, but can detach yourself from those who don’t deserve your energy – unless they have issues with your family or friends. Your protective nature won’t stop you from being reckless if need be.

Gemini (May 21st-June 20th)
You may gossip about toxic people with others and also want to be well-informed about them before you make your own decision.

Cancer (June 21st-July 22nd)
Criticism is a tough pill for you to swallow; you’re a sensitive soul. And even though manipulators, liars or cheaters don’t deserve your energy, you take some of the hurtful things they say to heart. You may even end up silently holding a grudge against them.

Leo (July 23rd-August 22nd)
It’s important for others to recognize that when they get on your bad side, you’re a force to be reckoned with! Though you’re an entertainer at heart, you won’t stand for being the butt of anyone’s jokes. You’ll be quick and fierce to remove these people from your life.

Virgo (August 23rd-September 22nd)
The Virgo woman is particular to the very last detail. If you don’t feel a sense of reciprocity from the people you care about, you won’t feel any guilt in finding what you need from other people. Your sense of self grounds you when dealing with difficult people.

Libra (September 23rd-October 22nd)
If you sense subtle harmful behavior from people you care about, you may not point it out immediately out of your fear of conflict. But the moment toxic behavior becomes apparent and unjust, you’ll throw your diplomacy out the window and fight for your rights (or the rights of others).

Scorpio (October 23rd-November 21st)
Hell hath no fury like a Scorpio scorned. You are stubborn, strong and aren’t afraid to sting when the time comes. When a toxic person crosses you, you may already be plotting plans of revenge.

Sagittarius (November 22nd-December 21st)
A Sagittarius woman knows how to speak her mind yet still remain quite charming. If you feel offended however, you aren’t afraid to tell others exactly what’s up – even if it comes off rude (at least it’s not toxic!)

Capricorn (December 22nd-January 19th)
Capricorns are very cautious about trusting others. So when a toxic person shows their true colors, you may be offended and even mean towards them – at least in your mind. Sometimes, you hesitate to make your emotions known.