How To Slow Down, Relax, and Still Get It All Done! 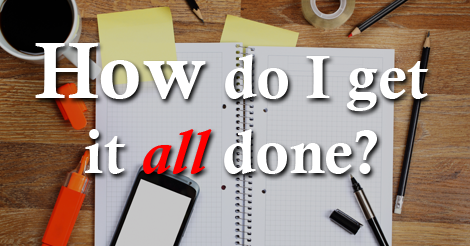 Sam, a regional operations manager is feeling the stress and pressure of his new responsbilities. He had plenty on his plate before his boss gave him even more to do but he wasn’t exactly given the option to say no. Now, only two months into his new work load, he is wondering how he will handle it all.

I advised Sam to talk to his boss about priorities and his boss’s reply was “Everything is a priority, I can’t do anything about your work load. I’m sorry, but that’s your problem.” Ouch! I’m glad I’m not working for Sam’s boss!

I also suggested to Sam he begin to delegate what he could and give his team members an opportunity to develop their leadership potential. Other than that, what can Sam do?

What Sam can do is to slow down. However, when I suggested that, he told me I was crazy; yes, that was the word he used. He wasn’t exactly happy with my suggestion, explaining that he could only work in lunch about once or twice a week. On a “normal” day, he would eat in his car on the way to another crisis. Sam wanted to know exactly when and how was he going to slow down.

What did I say to Sam? Of course, I empathized with him and agreed he had a real challenge and that he couldn’t count on his boss coming to his aid. Then I told Sam that if he didn’t slow down, his body would find a way at some point to make sure he did.

Next, I told Sam how he could slow down without suffering any dire consequences to his performance.

If you need to slow down but don’t think that’s possible, think again. I suggested that Sam take three breaks during the day and give himself what he needed. Call it meditation, guided imagery, self-hypnosis, visualization or just “time to think,” it doesn’t matter; what matters is doing it.

Start out with two minutes, three times a day: morning, mid-day and end of the day or almost end of the day. Unless you are in a scenic spot where you can look at something in nature that makes you feel good, close your eyes and imagine being in a special place that relaxes and calms you. Give yourself two minutes  to feel calm, relaxed and peaceful.

Another thing you can do is to close your eyes and remember anything or any time in the past where you felt good, for whatever reason. Just sit there and feel good. The payoff will be enormous. Your body, mind and spirit will thank you.

Here is another way you can spend your “slowing down” time: make a mental list or a tangible list of what makes you happy or what prompts gratitude in your heart. End your two minutes with a simple statement of “Thank you!”

If you need to slow down, it only takes two minutes, three times a day. Or once a day…you can do that; it’s a beginning. We often think we have to make major changes to do major good. That’s all or nothing thinking and it only creates more stress.

Think small, begin small and you will be amazed at what happens.

– Alan Allard, Executive Coach    To hear more from Alan, sign up for his newsletter at www.alanallard.com