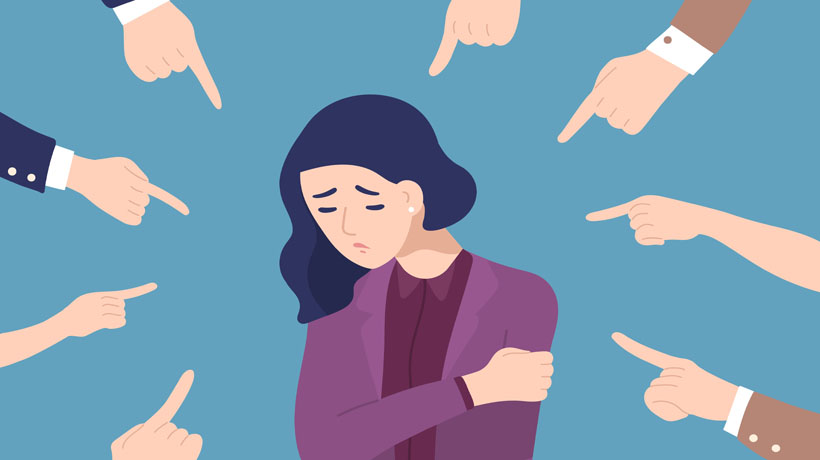 Many people have had relationships with someone who criticizes them, assigning them negative intentions that aren’t theirs. If you have had this kind of relationship, how can you remain open, non-defensive, and emotionally intact when someone uses you as a place to unload their anger, guilt, and shame? How do you successfully confront a person who isn’t seeing their part in the problem?

The first thing to do is reflect on your own behavior. If you find that there is validity in what this person is telling you, you can take a good look at what he or she is pointing to, and try to use their words as an opportunity to grow. You need to have the courage to stand up to a blamer and be careful not to blame yourself.

When you are in a relationship with a chronic blamer, it’s often because the blamer needs you to remain the bad one.  In this case, you have been assigned a role in the other’s internal narrative, and you are playing a negative character for them in their storyline—all of which is about them and not you.

While you can’t control what another person thinks about you, you can most definitely confront them.  Although many of us dread confrontation, there are five key strategies to make your points as productive and healthy as possible:

Mentally prepare
Reflect on what you’re feeling and identify the real issue that you need to address. For example, if you feel angry, it is because you are not on track to assert a right you think you have. It might be a right to be considered or treated with respect.

When you can name your emotions, you can tame them. It will help you see more clearly.  Tease out all the independent factors that aren’t relevant to the discussion.  Then try to imagine what the individual you’re confronting cares most about in this issue and put yourself in their shoes so you may anticipate how they’ll likely respond and be prepared for that.  Also, think about the ideal resolution for both of you. Then, craft what you want to say in one or two fact-based sentences.

Set the stage
A confrontation doesn’t have to mean “fighting.”  Seek a safe environment for the conversation by making it private.  Ask permission from this person to discuss the situation, and schedule a time that’s mutually convenient.  Something like this can work: “I would like to discuss with you an issue that’s been on my mind about how we communicate with each other.  Would you be open to that?  When might be a good time to talk?”

Let this person know your commitment to the relationship and what is going right, as well as your view that the blame on you is actually something they are responsible for.  Say what you need to introduce the issue, but with as much respect and compassion as you can muster.

Engage productively
When you do confront the other person, make your opening statement in a non-emotional, fact-based manner, then STOP talking.  Don’t waffle, add qualifiers, or go on and on. Let there be silence and count to five slowly.  The other person will be the next to talk instead of you. Let the other person respond, and truly LISTEN to them.  Own your own feelings and don’t bring other people into it. Paraphrase what you hear the other person say to verify you understand what they are saying. You don’t have to agree with them – just HEAR them.

When you engage in a confrontation, it’s important to understand your own agenda, but be open to explore other possible interpretations and solutions.  Do your best not to argue during the confrontation, but stay calm and focused on the real issue.

Say it well
This needs to be an open and honest discussion of what you both need and want.  You and the other person will most likely have two very different viewpoints – that’s natural and to be expected.  However, be confident about what you see is happening and what you are entitled to (stay factual and supportive). You don’t have to take in any blame that you know is their responsibility. They may still not see it, but you don’t have to take it on.

Stay calm and steer clear of inflammatory comments.  Keep to “I” statements that present what you are experiencing. For example, “I would prefer in the future that you come to me personally when you think I am doing something that upsets you. I respond better when I’m confronted one-on-one rather than in a group.”

Believe in the possibility of a mutually satisfying resolution
Don’t decide what the precise outcome has to look like.  Explore and discuss potential solutions and try to focus on both of your individual needs and wants.  Go into the conversation with the hope that you can strike a compromise that satisfies you both. With blamers who can’t handle looking at their guilt and shame, you can expect they may not be capable of a compromise. Don’t take it on yourself!  Discuss the positive and negative possibilities of each suggestion before you reject any suggestions.  If you can agree on a way forward, decide on a follow-up plan that meets both your needs.  Then determine what each of you will do to address the issue going forward.

Of course, not every confrontation can or will end positively, especially with a blamer who can’t be accountable for their part of the relationship.  But following these steps and committing yourself 100% to a mutually satisfying outcome will go a long way in standing for your needs and speaking up.