How To Know He’s a Partner Not a Project 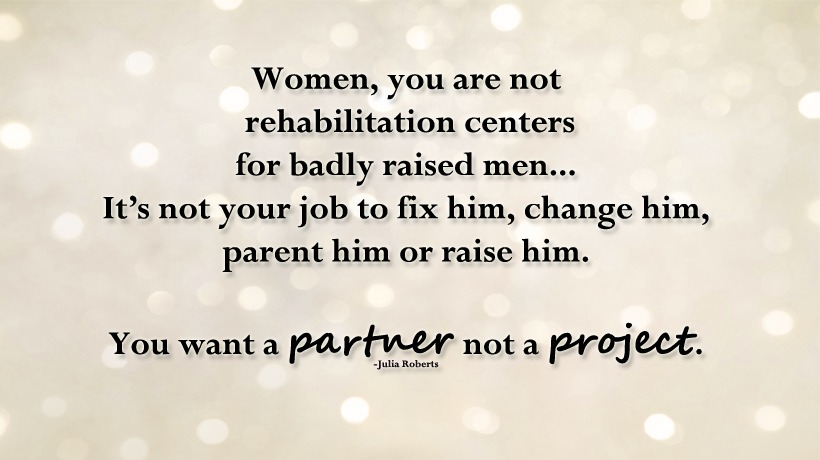 You probably have heard a story about a woman trying to fix a broken man with her love. Psychologist Seth Meyers, Psy.D., claims that this is one of the most common relationship problems that face women today. Meyers states that when women are desperately trying to help their partners, what they are actually doing is trying to change them.

In trying to change someone who needs “fixing”, you are hoping to get to a point where things seem “fixed”. But why not find a partner who doesn’t need “fixing” in the first place?

Here are the signs that will tell you if he is a partner, not a project:

They don’t hold you back and they push you to be better.

A partner isn’t going to discourage you from pursuing your dreams and passions. Instead, they will be supportive, giving you hope during the times you feel like giving up.

Your friendship is just as strong as your romantic relationship.

Suzanne White, Ph.D., says, “When we consider our partners as our ‘best friends,’ our self-esteem tends to be a little bit higher. This just goes to show that companionship is every bit as important as the romance might be when it comes to exclusive relationships.” Having your best friend to lean on during times the romance isn’t at an all-time peak is important.

They understand the idea of “give and take.”

They are aware that it takes two partners putting in effort in order to have a successful relationship. You both pick up the slack when the other is sick or tired. The two of you make each other feel loved and wanted. Someone who feels like a project would expect most of the work to be done by you and it would feel like a one-sided relationship.

Communication is a priority to them.

You want a partner who encourages your opinions. They show an interest and a curiosity in your perspective and needs. During a disagreement, they would strive to reach a compromise, and they don’t avoid a challenging conversation.

They aren’t afraid to apologize.

Psychotherapist and couples therapist Susan Lager, LICSW, says, “Healthy couples apologize when they behave badly. Unhealthy couples rationalize or deny their hurtful or disrespectful behaviors.” A partner will admit when they were in the wrong because they view you as an equal.

They don’t blame you when you’ve made a mistake.

Lager also says a partner isn’t going to point the finger at you for making a bad decision, such as a poor financial investment. They provide compassion and forgiveness while focusing on a solution.

When you’ve been through hard times they have stood by your side.

A partner is if they are there for you when things seem to fall apart. Whether you were sick, lost a family member or got fired from your job, they ease the pain. If you are with someone who makes excuses and does not show up, they are not the person for you.