How to Recognize Gender Bias in the Workplace & What to Do 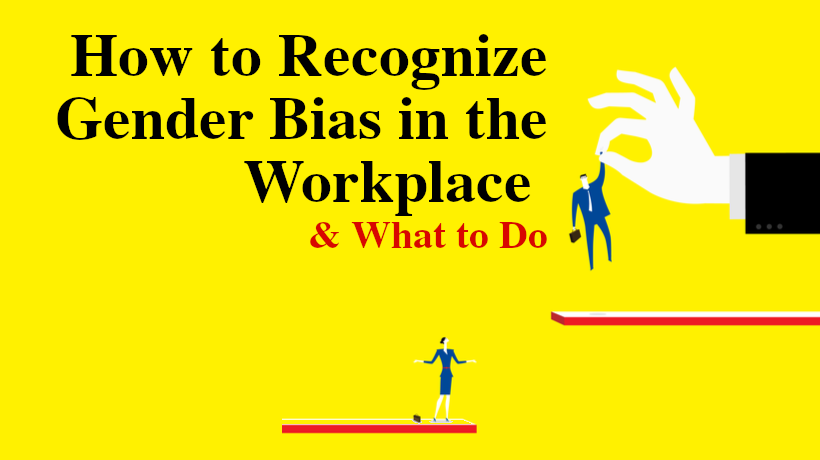 ‘Being female’ in the workplace often means that you may experience bias in varying forms throughout the day.  You know that you are being subject to bias if you have an intuition that something feels ‘off’ in the way you are treated in the situation. You aren’t seen or feel disrespected. Decisions aren’t made on facts.

It’s up to the people in the organization to be aware and committed to creating a culture where each person feels she belongs, feels safe, and valued. By recognizing when it happens,  you can detach from the hurt and anger at the moment and play an important part in changing the awareness and behavior of those who perpetuate bias.

The feedback is vague and leaves you more confused than before you got it!

Research by McKinsey/Lean In (2019) shows that feedback given to women is more vague.  Whereas men are frequently told specific ways to improve business outcomes, feedback to women emphasizes personality factors or communication style. The net is that men get constructive information on how to be better at their jobs so they can advance, and women get feedback about how they are perceived. This leaves many women in a perpetual state of scrutiny and confusion about how to operate optimally in the work environment.

As a first-line response, ask the feedback giver to provide concrete examples to help you understand the context.  Ask clarifying questions like: “Can you tell me what you mean by x?”  Be specific, for example, “in order to be seen as ready for the next level position, would I need to be seen as more strategic?  Lead more people? Get them to tie their vague judgments to something concrete: “Can you connect the dots how this is impacting my ability to get the job done?”

You’ve probably been on the receiving end or heard these micro-aggressive remarks leveled at others who don’t deserve them.  One example could be the indignities that U.S. Representative Andrea Ocasio-Cortez was subject to by a fellow elected official. These remarks make your head spin around and check your calendar as to what year you are living in!

These are the moments that call on you to step into your power.  You can face it head on: “What you just said landed as an ‘Ouch’.  Was it your intent to say something that suggests women would not be fit for this job?”  Or “I’m not sure what your intent was in saying that. Let me share with you the impact that it had on me…”

Where relevant, you can flip the energy of the situation. When we are told we are ‘emotional’,  I would say: “OMG, You are SO right!  Thank you for recognizing how exasperated I am that it took 5 times for you to get it”

‘Maternal Bias” occurs when decision-makers question the commitment and fit of a role for a female working parent. If others perceive her as having too much of a conflict (e.g., she has a young child or is parenting 3 children while working from home), they might decide not to offer her an opportunity.  If you learn about this or hear this in a room, you are justified to say:

“I get the sense you were trying to protect me by not talking with me about this high visibility project knowing that I have 2 kids I am homeschooling while working full time.  I appreciate the sentiment behind your decision, but I don’t appreciate that you made the decision FOR me. I would like to be the one to make a decision about whether I have the bandwidth for it and whether I would like to take the role.  Can you tell me what opportunities I am being considered for, I’d like to think them over and get you an answer tomorrow.”

The “Prove it Again” Bias

What can you do?  Instead of talking only about your past accomplishments, also explicitly bring their focus to the potential you bring to the role.  Tell them about what you want to do and get them excited about the value you will bring. Tell them about what you will do in the first 90 days of the job.  Use the language that a person at the next level uses.  Get them to see a picture of you in their mind doing the kind of work you WANT to be doing.

It’s the ‘goldilocks’ scenario – where women have to show up as some unattainable version of ‘just right’ – not too masculine and not too feminine.

For example, a talented woman in my Next Level Leader virtual group coaching program had been getting praise for her leadership on a project and was so influential that even as a mid-career professional she’d been getting approvals directly from the C-suite.  She advocated for herself to lead another project that aligned with her career goals, and another woman called her ‘aggressive’.

Put the attention back on them and ask what about your ‘Ask’ is making them uncomfortable?  You can also remind the person of the norms they learned in your Unconscious Bias training – “I think this is one of those words where it has different meanings for different people…what did you mean by that label? This counter-response turns the attention back on them so they have to be more precise about justifying the use of that charged word, and spotlights the discomforts of their own experience instead of on their vague perception about you.

Unfortunately, these ideas are so deeply embedded in our unconscious that almost every situation professionally and personally is an opportunity to rewire messages about women.

Every time a woman questions assumptions and points out devaluing language or thwarting actions she can change hearts and minds.  Every time a woman owns her worth she creates a new standard for those who interact with her and gives other women permission to own their worth too.

Every woman in her power is a Change Agent!