How to Spot Manipulators: Body Language to Look Out For 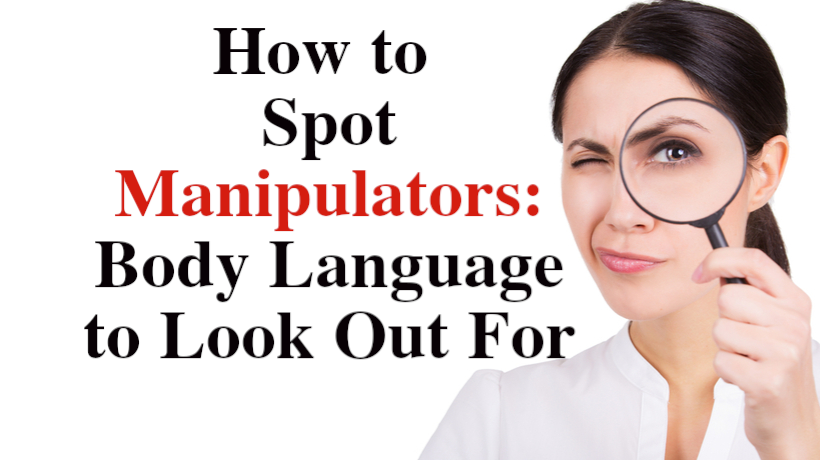 Manipulators can be anywhere. They can invade your life in many ways without you even realizing it. They can do it so smoothly sometimes that it can be hard to decipher when they’re being genuine. For this reason, it is important to be able to recognize some of their common behavior patterns. Along with various verbal cues, manipulators always have nonverbal cues for when they’re out of their comfort zone or being dishonest.

According to the Redkite Project, an organization that works towards the well-being of high-stress individuals, manipulators move into your personal bubble to create a false sense of intimacy. Even if you’ve stepped back to give yourself some space, they may lean in too close or repeatedly touch your arm or shoulder to create a “bond”.

The Emotional Intelligence Academy says that mirroring what you do is technique manipulators use to throw you off. In this case, they emphasize the importance of knowing a person’s “baseline” movements—how they usually respond to a situation. If they start to get defensive or change their body language when you bring something up it might be a sign that they’re putting up a mental barrier.

Both the Redkite Project and the EIA agree that self-touching is one of the biggest giveaways of uncomfortable body language. If things like rubbing the neck, crossing the arms or playing with hair are not their “baseline” movements, it could be them trying to compensate for their emotions or stall for the time being.

Along with self-touching, constant body movement could be a key sign that something isn’t right. “Fidgety gestures, such as tapping feet, clicking pens, and biting nails… can all show signs of low-level anxiety or stress,” the EIA says. Playing with jewelry, the Redkite Project adds, is pretty obvious as well.

Gaze and blink rates are signals that indicate a person’s internal state, according to the EIA. “On average we have around 4 or 5 blinks per minute. So, our eyes only really need to blink one blink every 12 to 15 seconds or so, in order to lubricate,” they continued. An increase in blinking may indicate someone is nervous or talking while a decrease in blink rate may indicate that someone is thinking hard.