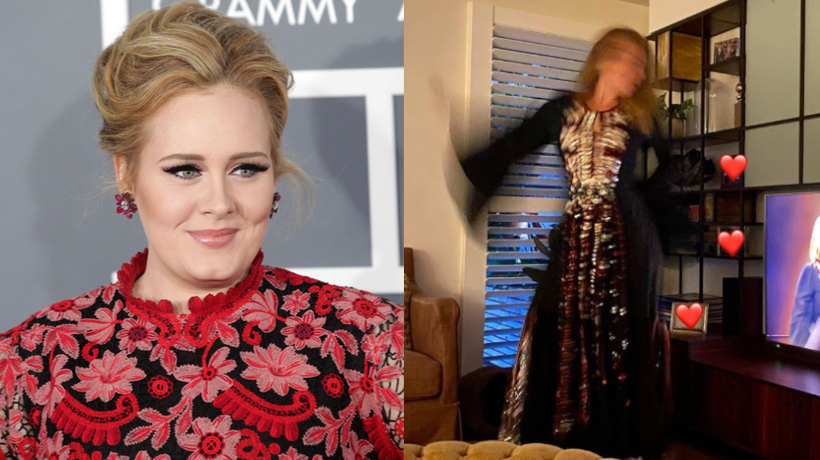 On May 6, 2020, Adele broke the internet when she posted a picture on Instagram, after a social media hiatus, showing off her 100lb weight loss. Adele has been open in the past about struggling with her weight.

When Adele celebrated her birthday last year, she hinted that she was going through a big period of growth. “I’ve changed drastically in the last couple years and I’m still changing and that’s okay. 31 is going to be a big ol’ year and I’m going to spend it all on myself,” she wrote in an Instagram post last May.

“For the first time in a decade I’m ready to feel the world around me and look up for once. Be kind to yourself, people we’re only human, go slow, put your phone down and laugh out loud at every opportunity,” she continued. “Learning to REALLY truly love yourself is it, and I’ve only just realized that that is more than enough.”

On Saturday, Adele posted two photos where she could be seen watching a recording of one of her performances on television. In the first image, she fanned herself while wearing sweats and squatting near the TV.

In the second photo, she wore the same dress that she had on for the festival and captioned the photo, “5 ciders in.” Adele is known for being notoriously private and took the time to cover up her photos with heart emojis.

“Of course it’s not,” the singer wrote. “Corona ain’t over. I’m quarantining. Wear a mask and be patient.”

Earlier this year, Adele appeared at a friend’s wedding, where she performed, but also told the audience to “expect my album in September,” as showcased in a since-deleted clip obtained by Pop Crave.

We are so happy for her that she is celebrating herself and staying safe.