How You Think You Flirt vs. How You Actually Flirt Based on Your Zodiac Sign 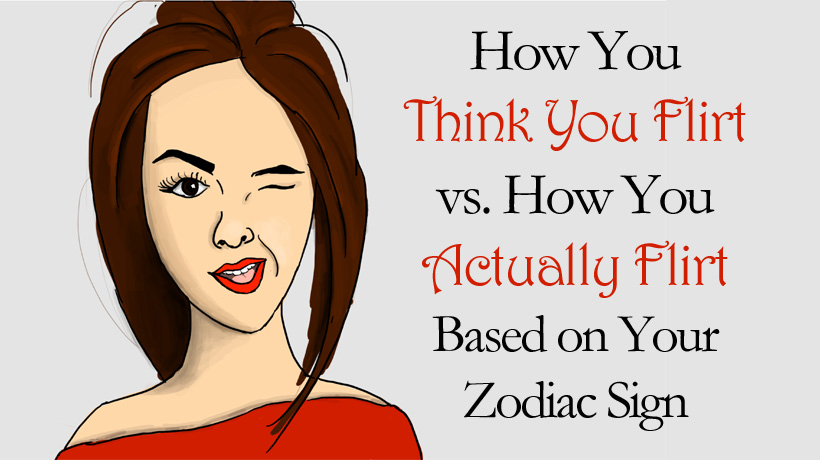 When you see someone who’s a pro at flirting, it can be like watching a gymnast or an ice skater flawlessly execute a routine. They make it look so easy, but when you try it at home, even your best endeavors leave you falling flat on your face. Sure, for some people flirting comes as naturally as breathing. But for others, it can be awkward or uncomfortable.

Most of us would like to imagine ourselves as flirting aficionados well-versed in the language of love, but odds are that isn’t exactly the case. That wink you practiced in the mirror actually looked like a twitch in person. The casual, yet coy half-smile you think you’ve mastered is harder to detect than Mona Lisa’s. Worried this may be you? Well, here’s how you think you flirt versus how you actually flirt according to your zodiac sign.

How you think you flirt: Aries is definitely a sign that considers themselves a flirting connoisseur. In your head, your approach is direct and sexy, showing off your fiery personality and confidence. You are the hunter  –not the prey – and you love a bit of a challenge.

How you actually flirt: Aries have a tendency to come off as overbearing and brash, and your “prey” may not enjoy the feeling of being “captured.” Your flirting technique is aggressive, and may even be competitive. You might be willing to knock out any competition standing in the way of your prize.

How you think you flirt: Taurus prefers to take a laid-back, down-to-earth approach to most things in life, including flirting. You imagine yourself as a low-key flirt, using subtle touches, demure smiles, and your magnetic aura to attract your love interest.

How you actually flirt: Taurus’ low-key flirting technique may be too low-key. In fact, it’s so low-key that your crush thinks that cute little arm-brush was an accident, and is now buying a drink for that Aries he’s been talking to (because he knows she’s interested).

How you think you flirt: Geminis without a doubt have the gift of the gab, and often use their bodies to communicate as well. To you, flirting should be full of witty banter and playful touches. You’d like to think of yourself as charming, knowledgeable, and funny when you flirt.

How you actually flirt: Gemini can get swept up in their own dramatics sometimes and have trouble passing the mic. While you may think you’re just keeping the conversation going, you’ve actually told the same story twice, and trying to follow your hands while you talk is giving your romantic interest whiplash.

How you think you flirt: Cancers, symbolized by the crab, have a hard outer shell to protect their feelings, so it may be difficult to bring the flirty side out of them upon first meeting. If you plan on being flirty, you’ll probably imagine yourself smiling and asking a lot of questions to get to know your potential love interest.

How you actually flirt: This sign is one of the few whose flirting style is the same both inside and out of their head. Cancers typically desire a deep emotional connection, so you’d rather go through that process by making your romantic interest your friend first.

How you think you flirt: Known for commanding attention wherever they go, Leos aren’t used to being turned down. You may consider yourself quite the capable flirt, enticing your suitor with your bold antics and dazzling looks.

How you actually flirt: Because Leos are so used to attention, they may feel they deserve it. This may cause you to be a bit dramatic in your flirting, with your gestures being perceived as over the top. Whether you’ve flipped your hair too hard or turned the conversation back to yourself (again) in an attempt to show your crush how great you are, the Leo flirting technique can be too grand for some.

How you think you flirt: Virgos can be pretty reserved and extremely critical, so finding someone with whom you deem worthy of flirting can be tough. When you do, you may imagine yourself playfully testing your partner to see if they can live up to your high standards.

How you actually flirt: This “playful” testing isn’t so playful. In fact, it’s an actual test, and your romantic interest didn’t study, causing you to come off as too intense or even mean while flirting.

How you think you flirt: Libra, like Leo, easily commands attention. But unlike Leo, you consider yourself a bit more graceful and subtle in your flirting methods, and seek to weigh your options before settling on one person.

How you actually flirt: Let’s be real, as a Libra, you aren’t even trying to flirt – you’re just being your natural, attractive self, and the fish are coming to you. But while weighing your options, your love interest – whom you assumed would make the first move – is captivated by a luscious hair-flipping Leo.

How you think you flirt: Quietly passionate, Scorpios will attempt to seduce their romantic interest without words. The sheer intensity of your gaze paired with your robust sexual aura is enough in your mind.

How you think you flirt: Sagittarians like to think of themselves as worldly, free, and philosophically inclined. Naturally playful, you may resort to games while flirting to keep things interesting for yourself and maintain your sense of freedom.

How you actually flirt: You make a comment about wanting to get out of this dimly lit bar and just drive. Your romantic interest takes this is an invitation, and goes to close out their tab. When they return, you’re already gone, because you always leave them wanting more.

How you think you flirt: Unlike Sagittarius, Capricorn has no time for games. You take a business approach to flirting, and prefer to lay all your cards on the table from the start so your potential partner knows what they’re getting.

How you actually flirt: You’ve mentioned the award you won at work three times, and your crush already knows five out of your top 10 pet peeves, where you see yourself in five years, and the marketing plan for that little idea that’s been cooking in your head. Yes, there is such a thing as being too direct.

How you think you flirt: Aquarians are very social creatures and gravitate towards those who can stimulate their minds. To you, flirting is all about a mental connection, and you love to boldly speak your opinions or truths.

How you actually flirt: You’ve gotten lost in a deep conversation about the latest books and conspiracy theories you’ve read, and your romantic interest no longer thinks you’re flirting with them. But it’s okay, because you weren’t that into them anyway.

How you think you flirt: Pisces can be shy and emotional and have a hard time letting their guard down. When you do, you imagine yourself as a quiet seductress, attracting your romantic by batting your long eyelashes and getting them to talk about their feelings.

How you actually flirt: In reality, you’re having a good conversation, sure. But in your head, the romance is off the charts, and your crush has already swept you off to Paris – no, Rome. No wait, Greece. Wherever it is, chances are that the best parts of this flirtationship are happening in your daydreams.