How Your Zodiac Sign Can Help You Spot a Liar 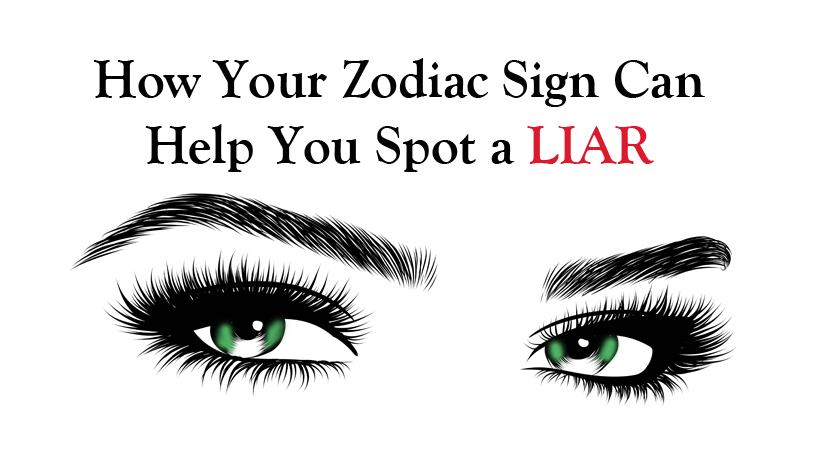 Spotting terrible liars is easy. Detecting a seasoned liar –– or even listening to your instincts when someone you trust is lying to you –– is much more difficult.

Yet fact-checking isn’t the only way we can sniff out the phony; everyone has a unique strength that helps her sift through the lies. Here’s how your Zodiac traits help you find the fibber.

Pisces (February 19th-March 20th)
Empathy is your go-to stance. Even if you’re suspicious, you tend to give people the benefit of the doubt. Because of this, people become less guarded around you, which means the liars may spill their secrets more easily. You’re the “good cop.”

Aries (March 21st-April 19th)
Assertive Aries doesn’t have time for anyone’s baloney. When you can tell someone is spinning a web of lies, you don’t let them continue; you stop them in their tracks and confront them. This interrupts their flow and forces them to circle back to the truth. You’d be a great moderator at a political debate.

Taurus (April 20th-May 20th)
Taurus is a creature of habit who loves her routines. You can pick up on changes easily. You’ll detect a liar when you notice a change in their speech patterns or a shift in their body language.

Gemini (May 21st-June 20th)
As an incredible communicator, Gemini can detect the subtlest sign of deceit. When someone is evading the question or adding qualifiers (like “not really” instead of “no”), you can pick up on them.

Cancer (June 21st-July 22nd)
Since you’re so in touch with your emotions, you can see it in their eyes. Cancer can see past the rehearsed lines and the calculated smile. If someone is being earnest and truthful, you’ll know.

Leo (July 23rd-August 22nd)
In your eyes, dishonest people are cowards. Leo values integrity, and anyone who shies away from the truth is a red flag. You may not always know the whole story, but you can spot a liar by the way someone sheepishly avoids the truth or sounds like they practiced their story 10 times in the mirror. Their lack of courage gives them away.

Virgo (August 23rd-September 22nd)
Your thorough work ethic means you’ve already done your homework. When you suspect someone is lying to you, either you’ve already heard it’s untrue or you do the detective work necessary to find out if it’s true.

Libra (September 23rd-October 22nd)
Libra is the first to know when something’s not quite right. Even before a liar has a chance to open their mouth, you can tell from the way they walked in to the way they won’t look you in the eye that they’re hiding something.

Scorpio (October 23rd-November 21st)
Your natural chemistry with people means they often want to agree with you. You sometimes use this to your advantage by manipulating the conversation. When you suspect someone is lying, try saying something else that’s untrue and see if they try to appease you. If they say, “Oh, of course!” when you know that they know it’s false, they’re probably lying about something else.

Sagittarius (November 22nd-December 21st)
You naturally love learning more about people. When you meet people, you don’t just ask where they’re from; you ask where that is, how far it is from a major city, how long they’ve lived there, and if they know your Cousin Jamie who moved their seven years ago. This is handy in catching liars since they usually rehearse their answers and are caught off-guard with follow-up questions.

Capricorn (December 22nd-January 19th)
You can look at the world with a healthy dose of realism. Because of this, you don’t always judge the truth based on your relationship with the storyteller or the charismatic delivery; you judge based on the facts that you know and the body language of the storyteller.

Aquarius (January 20th-February 18th)
Aquarius often acts on instinct with great success. Naysayers tell you, “Don’t do that! That’s too risky!” Yet you are able to blend your logical side with your intuition. You can spot a liar simply by trusting your gut.