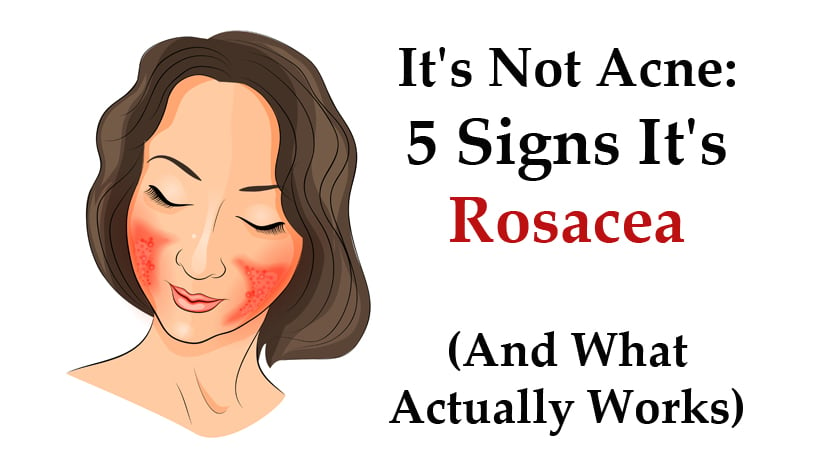 What’s red, large, and impossible to miss? If you guessed Clifford the Big Red Dog, you’re not very far off—rosacea is pretty much the dermal equivalent of this eye-catching canine.

If you’re like me, you know that this bothersome skin disease is nothing if not relentless. It is chronic and worsens significantly if left untreated. Arguably its most maddening feature, though, is that it is often indistinguishable from acne. Particularly to an untrained eye, its characteristic papules and redness can easily be mistaken for inflammatory breakouts.

For two years, I bought product upon product — benzoyl peroxides, salicylic acids, gel cleansers, and creams — to treat what I thought was a typical case of hormonal acne. I even paid for an entire acne.org skincare regimen with additional spot treatments and oils. But nothing worked. Most of these products only inflamed my skin and exacerbated the red bumps I had all over my face. Some would also leave me feeling itchy, dry, and generally uncomfortable.

It wasn’t until I admitted defeat in my uphill skin battle and sought the help of a board-certified dermatologist that I finally got the relief I was looking for.

During my first appointment, my doctor justified my fallen efforts with the claim that rosacea is often misdiagnosed as acne because of how similar the symptoms are. Both conditions are considered chronic inflammatory diseases, are characterized by red bumps on the skin, and are extremely common.

Rosacea, unlike acne, though, is often caused by abnormalities in the facial blood vessels that cause them to dilate after exposure to stimuli that most normal vessels do not react to at all. This dilation increases blood flow to the skin, which causes distinguishing symptoms such as:

Everyday triggers to look out for

Rosacea is episodic in nature, with patients experiencing enduring flare-ups of varying intensity throughout their entire lifetimes. It is also, unlike acne, triggered or worsened by exposure to a few very specific, “everyday things” including:

This list is intimidating — and sort of makes anything short of living in a sterile, well-ventilated box seem impossibly dangerous. But a proper rosacea-specific skincare routine can, in fact, mitigate most of its symptoms, particularly if the diagnosis is made in its early stages of development.

What worked for me

I was initially prescribed two topical antibiotic treatments (metronidazole gel for morning application and sulfacetamide for evening) in addition to CeraVe facial wash and lotion. Within two weeks, my bumps had gotten significantly smaller, and redness really became my only issue.

It has now been a little over a year since my initial diagnosis, and I have noticed a remarkable difference in my skin. After being very consistent with my prescribed regimen, the only symptom I experience consistently is rapid facial flushing when embarrassed. Occasionally though, when I’m not monitoring my triggers, I do get flare-ups that involve increased redness and pimple-like papules.

I’ve also recently tried out a light therapy mask by Neutrogena, which is actually marketed as an acne treatment. I’ve noticed that this tool works really well in combination with my aforementioned treatments, particularly in reducing redness.

Most dramatically, however, small lifestyle changes such as daily sunscreen application, a reduction in alcohol and chocolate consumption, and modification in rigorous workouts have made the biggest difference in my skin.

Just for fun, here’s a list of celebs that also have rosacea!