Julia Roberts: “The life that I’ve built with my husband [and my children]..that’s the best stuff” 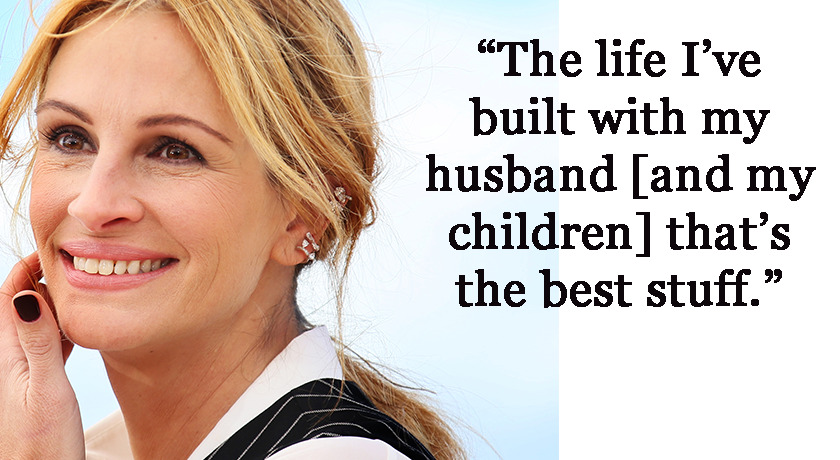 Actress Julia Roberts has starred in many critically acclaimed movies and is best known for her countless roles in iconic romantic comedies like Pretty Woman, Nottinghill, and My Best Friend’s Wedding.

However, since the 1990s, the amount of rom-com roles Roberts has taken has steadily declined. In an interview, she explained why she took a 20-year break from this genre of movies.

“Here’s the thing: If I’d thought something was good enough, I would have done it,” Roberts said. “If I had read something that I thought was that ‘Notting Hill’ level of writing or ‘My Best Friend’s Wedding’ level of madcap fun, I would do it.”

“But I also had three kids in the last 18 years. That raises the bar even more because then it’s not only ‘Is this material good?’ It’s also the math equation of my husband’s work schedule and the kids’ school schedule and summer vacation,” she continued. “It’s not just, ‘Oh, I think I want to do this.’ I have a sense of great pride in being home with my family and considering myself a homemaker.”

She simply wasn’t offered a script that was up to her standards for a long time. But, that all changed when she was offered Ol Parker’s 2022 movie Ticket to Paradise.

“They didn’t exist until this movie that I just did that Ol Parker wrote and directed,” she added.

According to Variety, Roberts read the script for Ticket to Paradise and almost rejected it because she thought it would only work if George Clooney played the lead alongside her. Thankfully, Clooney felt the same and was on board with the film.

“Lo and behold, George felt it only worked with me. Somehow we were both able to do it, and off we went,” Roberts said.

Ticket to Paradise, which hit theaters on October 21, 2022, stars Roberts and Clooney as a divorced couple. It was written and directed by Mamma Mia: Here We Go Again, director Ol Parker.

Per Vanity Fair, this is Roberts’ first rom-com since 2001’s America’s Sweethearts.

Between 2001 and 2022, Roberts built a family with her husband, Danny Moder. The couple married in 2002 and had three children together – twins Hazel and Phinnaeus, 17, and son Henry, 15.

Per Page Six, becoming a mom hasn’t been easy, but it means more to Roberts than any acting role she has ever done.

“When I’m not working, [being a homemaker] is my full-time job. It isn’t rainbows and kittens every day, but it does bring me a lot of joy,” she said. “It’s just never consumed me, being an actor. It is my dream come true, but it is not my only dream come true.”

She continued, “The life that I have built with my husband, [and] the life that we’ve built with our children, that’s the best stuff. To come home at the end of the day, triumphantly, to them.”