What Keeps You up at Night Based on Your Zodiac Sign 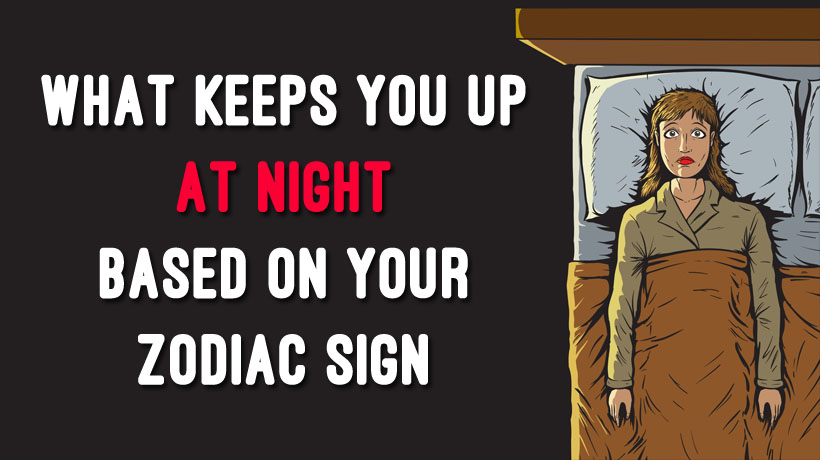 People often blame their sleepless nights on having too much energy. However, it’s important to acknowledge what scares you in order to overcome it. Here’s the real root of your anxiety, according to your zodiac sign.

Aquarius (January 20th-February 18th):
As an individual prone to progressive thought and justice, the only thing worse than the fall of society is the inability to prevent it. Your opinions are everything to you because they allow you to share with others how and why you plan to change the world. Therefore, anything that takes away your voice truly scares you.

Pisces (February 19th-March 20th):
You’re extremely self-conscious, and your fear of being criticized forces you to fear those who have any dirt on you. You’re often left terrified of encountering people from your past – you end up replaying moments of embarrassment or insecurity over and over again in your head.

Aries (March 21st-April 19th):
You always strive to use your optimistic attitude to help others, and the possibility that your attempts are not being well received crushes you. At times your moodiness can push others away, but once the reality of losing a friend settles in you become mortified. Your success is meaningless without having the ones you love share it with you.

Taurus (April 20th-May 20th):
Routines keep you sane, Taurus, and any inkling of change has you running for the hills. You absolutely need stability, and you’re very aware that this stems from your financial success. Any mistake at work leaves your palms sweating due to the fact that you could lose everything in a matter of moments.

Gemini (May 21st-June 20th):
While you thrive in your social life, you often lack the ability to make decisions because your focus is on seeking adventure. The anticipation of making a choice that you cannot go back on causes you some serious stress; the thought of being confined frightens you to your core.

Cancer (June 21st-July 22nd):
You take your emotions very seriously, which is why you don’t want your feelings to fall into the wrong hands. You need to feel comfortable with those you confide in, and if you have reason to believe that someone, especially a stranger, has access to your secrets you’ll be facing many sleepless nights.

Leo (July 23rd-August 22nd):
You have absolutely no problem acknowledging your worth, but this doesn’t mean you’re not affected by those who can’t do the same. You want others to hold you to high standards, but only without figuring out any of your faults. You cannot cope with feeling inadequate, more specifically when it involves others devaluing your taste for life.

Virgo (August 23rd-September 22nd):
You’re afraid of failure, but not for the reasons that people expect. Anything that involves you being the center of attention terrifies you, and this includes asking for help. You desire to fly under the radar, and usually your intelligence allows you to do so without any problems. But the moment you think you’ve slipped up is one that causes you major anxiety.

Libra (September 23rd-October 22nd):
You’re usually to blame for your restlessness, Libra, for you like to hold a grudge but won’t utter a word about it. You’re likely to obsess over how someone wronged you, but if said person catches on to your anger you become enveloped in fear due to the possibility of confrontation.

Scorpio (October 23rd-November 21st):
For you, being a true friend doesn’t usually involve sharing your innermost thoughts. In fact, your most powerful fear is exposing one of your secrets. You’re afraid to let others into your heart because you simply cannot trust anyone.

Sagittarius (November 22nd-December 21st):
You love a good philosophical theory, but concepts that are impossible for you to grasp cause you to obsess in an unhealthy way. You don’t want to be bound to your thoughts, but you can’t help your need to crack impossible codes.

Capricorn (December 22nd-January 19th):
You discipline yourself because you want to be successful and because you can’t fail without forcing yourself into a pit of fear. Feeling as though you haven’t been living up to your potential causes you to obsess over every mistake you have made in order to think of ways to pin your failures onto others.