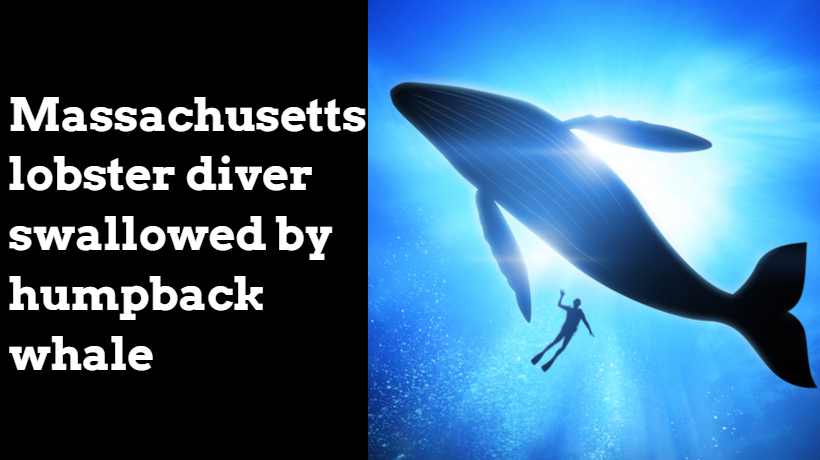 This past weekend, Michael Packard’s lobster diving routine took a sharp turn when the 56 year-old fisherman found himself entrapped inside the mouth of a hunchback whale. Off the coast of Herring Cove Beach in Massachusetts, Packard was swimming towards the sea floor to pluck lobsters off the sandy bottom when he suddenly found himself engulfed in absolute darkness.

“All of a sudden, I felt this huge shove and the next thing I knew it was completely black,” Packard told the Cape Cod Times later that same day after he was released from Cape Cod Hospital in Hyannis.

At first, Packard thought he had been swallowed by a Great White shark. But when he couldn’t feel any teeth and realized he hadn’t sustained any major wounds, it didn’t take him long to realize what had actually happened.

“I could sense I was moving, and I could feel the whale squeezing with the muscles in his mouth,” Packard said.

“I was completely inside; it was completely black,” Packard said. “I thought to myself, ‘there’s no way I’m getting out of here. I’m done, I’m dead,” the diver recalled. “All I could think of was my boys — they’re 12 and 15 years old.”

Packard estimated he was inside the whale for a little less than a minute before the whale finally surfaced and released him.

“I saw light, and he started throwing his head side to side, and the next thing I knew I was outside (in the water),” said Packard.

When the whale surfaced, Packard’s fellow crew member Josiah Mayo thought it was a shark by all the commotion in the water from the way the whale was shaking its head. Then the whale let Packard loose, flinging the Wellfleet fisherman back into the sea where Mayo picked him up and rushed him back to the Provincetown pier. From there, a Provincetown Fire Department ambulance took him to Cape Cod Hospital.

Whales are not known for being aggressive towards humans, and consume a diet that consists of small crustaceans and fish through a process known as “filter-feeding” that strains tiny food from the water like a sieve, allowing water to pass through while capturing food particles.

Incidents of feeding humpbacks injuring swimmers and divers, especially instances of swallowing them, are so uncommon that they are practically nonexistent, Jooke Robbins, director of Humpback Whale Studies at the Center for Coastal Studies in Provincetown, told the Cape Cod Times.

“Based on what was described, this would have to be a mistake and an accident on the part of the humpback,” Rooke said.