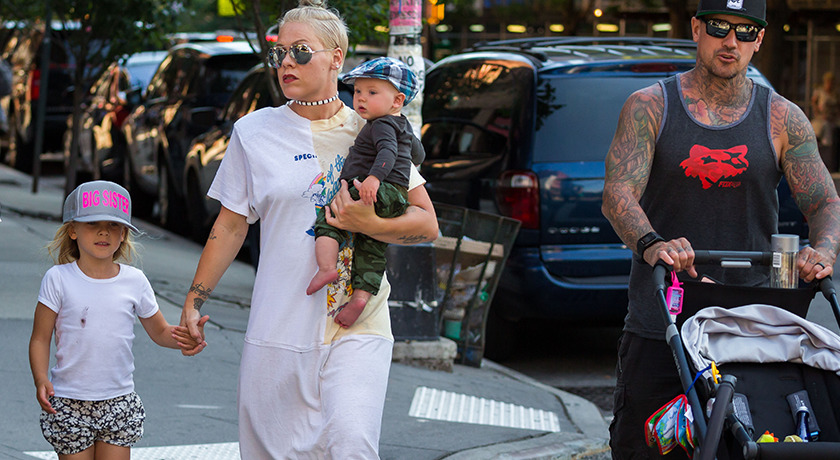 Pink, 41, and her husband, motocross racer Carey Hart, 45, have been together for 16 years. “We’ve really grown up together,” the Grammy winner told People.

The singer first met Hart in 2001 at the Summer X Games, and the two began dating. Hart appeared in her 2002 music video for her song “Just Like a Pill.” The two split up briefly in 2003 but quickly rekindled their relationship, according to Us Weekly. Pink proposed to Hart at his race in the Pro 250 in California, holding up a sign that said “Will You Marry Me?” to the motorcyclist. They were married in 2006 in Costa Rica.

Two years later, The couple separated in 2008, but reconciled in 2010 and are in a good place now thanks to therapy.

“I am a huge proponent of counseling in general. We both have therapy, individually, and we do couples counseling,” says Pink. “Long-term relationships are not easy….You have to end up fixing yourself; you can’t fix the other person.”

The couple shares two children, Jameson Moon, 5, and Willow Sage, 11. The singer has opened up about how being a parent with Hart has changed her for the better. “I’m much more open. I’m much more accepting of myself. I’m much more thoughtful,” Pink told Carson Daly on Today in 2019, according to Us Weekly. “I plan more. I have to. I have to figure out the balance.”

Some of the artist’s most famous hits were breakup songs written about her husband, including “So What,” “Mean,” “I Don’t Believe You,” and “Please Don’t Leave Me” from her Funhouse album. When questioned whether Hart minds being the inspiration, Pink told People, “I think deep down he’s flattered. He has been my muse. He knows what he signed up for, and the hits are just going to keep on coming, as they say.”