Matt Damon and Luciana Barroso had a Chance Meeting Tending Bar, and Look at Them Today 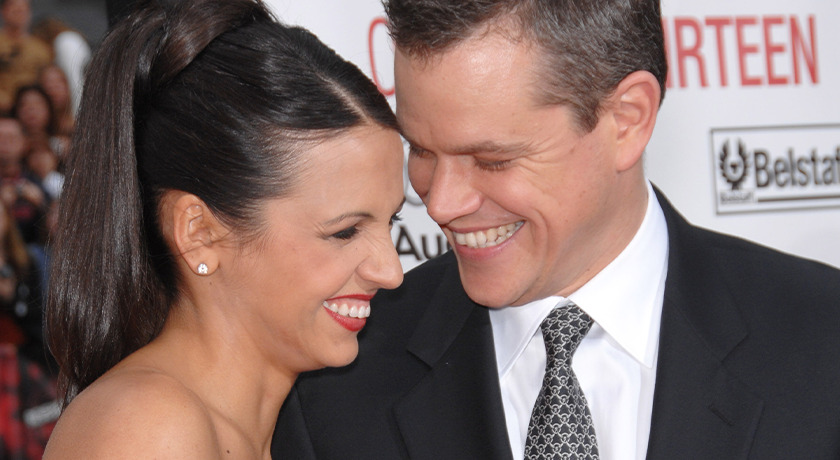 According to Parade, the two met at a Miami bar where Barroso was working as a bartender in 2003. Damon was in Miami at the time, filming the movie Stuck on You.

In an interview with Vogue Australia in 2018, Barroso recalled the night she met her future husband.

“Matt’s story is that he saw me across the room, and there was a light on me. And I’m like, ‘Yeah, it was a nightclub—there were lights everywhere!’” she said. “But he had started getting recognized and asked for pictures and autographs, and then it got kind of aggressive because people are drinking and stuff, and so he came and hid behind my bar … [wanting to] just hang out back there and have a drink. He says, ‘Oh, I saw you, and I really wanted to talk to you.'”

While Damon was behind the bar, Barroso made him help her bartend.

“He had trained as a bartender for a film years before, so he started making drinks, she said” And he made me a ton of money in tips that night because, of course, everyone wanted to go and see him. So it turned into a really fun night, and then 15 years later, here we are!”

Barroso was a single mom at the time, raising her then-four-year-old Alexia. Barroso’s daughter was her main priority, but that didn’t stop Damon from trying to pursue her.

“We definitely had a connection right away,” Barroso revealed. “It was so easy to talk to each other [and] we were very comfortable [with each other], and by the end of the night, he invited me to go out with his friends. But I was like, ‘I can’t, I have a 4-year-old daughter, I’m not going anywhere’… and that was one of the things he loved, that I had a daughter. He said, ‘I love that you’re a mom, and that’s your priority,'” she said.

Per Vogue, the couple married in 2005 at Manhattan’s City Hall. Damon adopted Barroso’s daughter Alexia, and the couple eventually had three daughters of their own – Isabella, Gia, and Stella.

The couple has done a great job raising their children out of the public eye and giving them a normal life.

“They can try to stake me out, but they’re always going to get the same story: middle-aged married guy with four kids,” Damon said. “I remember telling [Brad Pitt] that I walk my kids to school, and his face just fell.”

The couple has been going strong since 2005 and even renewed their wedding vows in 2013. The ceremony took place in St. Lucia with many famous friends in attendance, including Ben Affleck, Jennifer Garner, John Krasinski, and Emily Blunt.

During the ceremony, Barroso revealed that she didn’t know who Damon was when they first met.

“He looked a little like that guy from the silly Will Smith movie about golf, only pudgier,” she said. “That dorky guy ended up being the love of my life.”

Along with a busy family life, Damon continues to keep his acting life busy. He recently starred in Thor: Love and Thunder in 2022 and is set to star in the upcoming movie Oppenheimer in 2023.