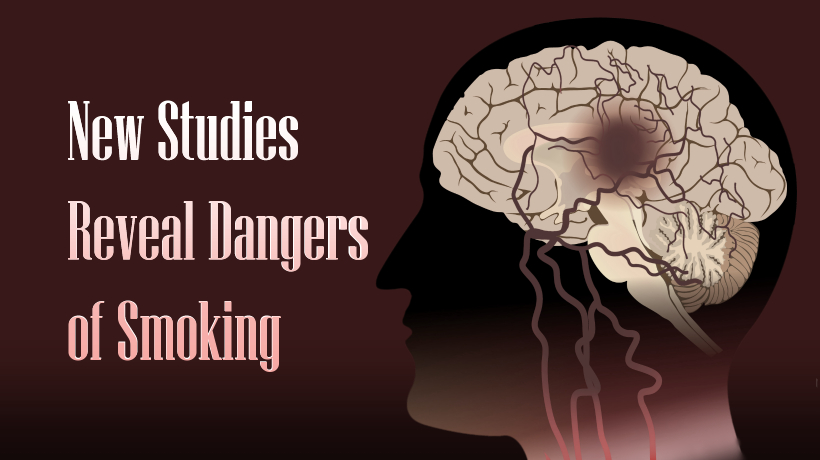 Smoking was a hot topic this week for health researchers. Two academic journals published different studies on how smoking tobacco negatively affects the body: one about smoking’s effect on infants and one about unhealthy brain aging in adults.

The idea that smoking can have harmful consequences is nothing new. The Centers for Disease Control and Prevention (CDC) says cigarette smoking harms nearly every organ of the body and causes diseases like heart disease, stroke, and cancer.

These two studies provide more evidence that explains how smoking directly impacts the body, from your health as an infant to your health late in life.

Sudden infant deaths
A study published Monday in a journal by the American Academy of Pediatrics says smoking during pregnancy can have potentially serious consequences on the baby. The study examined the relationship between smoking and sudden unexpected infant death (SUID). SUID is a term for any death of a baby less than a year old who dies suddenly and without an obvious cause. SUID includes sudden infant death syndrome (SIDS), which is when an infant accidentally suffocates while sleeping.

The researchers acknowledged campaigns in the 1990s for proper sleeping positions for infants in the hope of lowering the number of SUID cases. According to the study, this contributed to a 50% decrease in SIDS cases in the US. However, during the period when the number of cases due to sleeping positions decreased, the number prenatal maternal smoking-related cases of SIDS has increased.

The research team studied data for over 19,000 cases of SUID released by the CDC from 2007-2011. They found that any smoking during pregnancy was associated with double the SUID risk. They also found that the more a mother smoked during pregnancy, the higher the chance her baby might suffer from SUID.

If mothers quit or reduced smoking during pregnancy, the relative risk of SUID decreased compared with those who continued smoking. They estimated that US SUID rates could be reduced by 22% if no women smoked during pregnancy.

Just how smoking contributes to SUID isn’t clear, but experts suspect the increased serotonin affects the ability of the brain to regulate the respiratory system during sleep.

Weaker brain health
Another study published on the same day, this time in the European Heart Journal, says smoking can damage more than just our lungs. The research team examined MRI scans of the brains of 9,772 people, aged between 44 and 79, in England. The researchers were looking for links between brain structure and one or more vascular risk factors, which included smoking, high blood pressure, high pulse pressure, diabetes, and obesity. According to the study, all of these risk factors affect the blood supply to the brain.

They found that these risk factors were linked to greater brain shrinkage, less gray matter (tissue found mainly on the surface of the brain) and less healthy white matter (tissue in deeper parts of the brain). Among the other risk factors, smoking was one of the most common factors to affect complex thinking skills and show signs of dementia and Alzheimer’s disease.

Dr. Simon Cox, a senior research associate at the Centre for Cognitive Ageing and Cognitive Epidemiology at the University of Edinburgh, led the study. He says smoking was a common denominator for the weaker brain health.

“We found that higher vascular risk is linked to worse brain structure, even in adults who were otherwise healthy,” says Dr. Cox. “These links were just as strong for people in middle age as they were for those in later life.”

Both this study and the CDC say quitting smoking can help lower the risks of these diseases and add years to the former smoker’s life.