Are You up Against a Pathological Liar? Here's What to Do ASAP 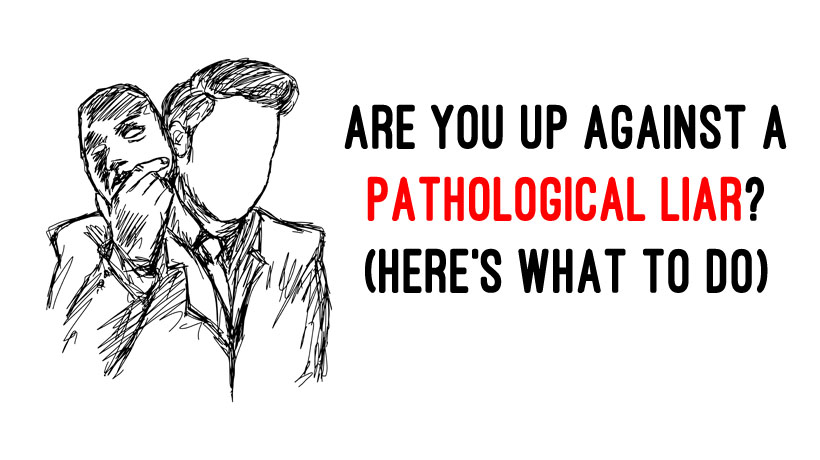 You fell for him. He told you he was a graduate of West Point, a Navy Seal, and had started a successful financial planning business. He seemed smart, had money to throw around and was oh, so male.

When she joined the company in which you worked, you liked her immediately.  She became your office BFF. You looked forward to sharing stories about your weekend and family and hearing hers. When she told you negative stories about your co-workers and boss, you believed her, because why would she lie?

Except, as you learn to your dismay, he and she are pathological liars clothed in personal bodies and personalities. How do you not get fooled? And if you have been, how do you recover?

Signs you’re dealing with a pathological liar
Figuring out that someone’s a pathological liar can be harder than you’d expect. The nonverbal cues we associate with liars—that they might look down and away, cover their mouths with their hands or fidget and become oddly tense when winding up to tell a whopper—don’t surface in pathological liars. These truly skilled liars have learned how to make nonstop eye contact and appear relaxed when telling a lie, in part because lying creates no tension for them. Worse, many pathological liars excel at winning your confidence through charisma.

You can, however, begin to notice that something appears off. You start to notice story inconsistencies, and that the liar’s tales seem overly dramatic. At first, their stories hold you spellbound and then gradually you think “that can’t be true.”

If you’re up against the liar
He or she had studied you, to figure out what you may or may not believe and to determine how to take advantage of you. The liar looks for and hones in on your weaknesses.

Do liars feel remorse? No. They lack empathy and the moral consciousness that might keep them in check. They don’t care how their lying hurts and damages you. Instead, if you catch them in a lie, they react aggressively, coming up with other lies to cover the first one, and blaming others when they can’t escape that you’re seeing the truth.

What can you do?
The most important thing you can do when you’re up against a liar is to trust yourself. A liar makes you doubt yourself, turning you against you. Don’t let that happen.

Next, you’ll be tempted to react to their lies. Don’t let this happen, because when you react, you find yourself off balanced. Instead, stay calm and objective, and say what you know to be true.