Do You Take Things Too Personally Based on Your Zodiac Sign? 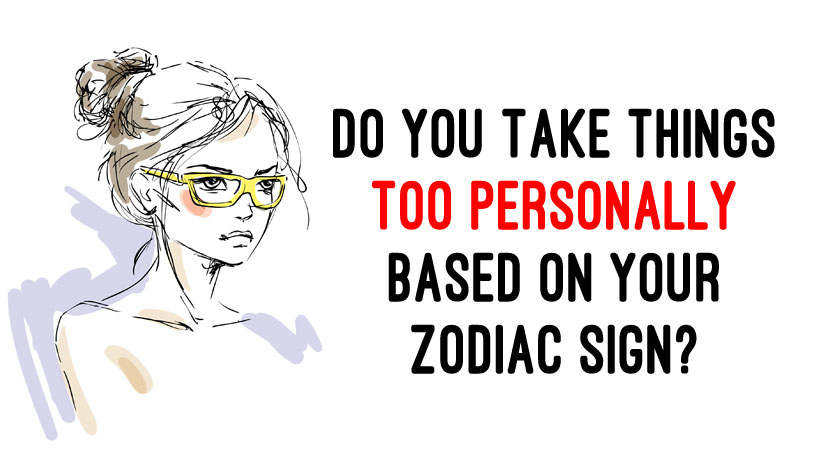 Whether it’s in a relationship or in day-to-day-life, some people have the tendency to be more easygoing than others. It’s healthy to achieve a balance between the two. There are times where you may be a little more carefree about things, and there are also times where you need to focus. According to your zodiac sign, here’s just how serious you take life.

Aquarius (January 20th-February 18th)
Aquarius women are notorious for relying solely on themselves. Since you are so independent, people might interpret your personality as stoic. They aren’t wrong in the sense that you take things seriously – but you do know how to have fun every now and then.

Pisces (February 19th-March 20th)
Your sign doesn’t like to color in between the lines. You have a carefree approach to life, but you know when it’s appropriate to buckle down.

Aries (March 21st-April 19th)
You are driven and focused, and you don’t let anyone stand in the way of your goals. You feel as though you have to adopt a sharp attitude in order to achieve your aspirations.

Taurus (April 20th-May 20th)
Taurus women thrive on reliability. You need everything in your life – whether this is a relationship or even a job – to be built on trust and stability. Because of this, you tend to have a more solemn outlook on things.

Gemini (May 21st-June 20th)
Your sign can go from being free-spirited one moment to being deeply thoughtful the next. You sometimes swing erratically and without warning between these two mannerisms. It would be beneficial for you to try and achieve a balance between them.

Cancer (June 21st-July 22nd)
As a Cancer, you are ruled by your emotions. It can be hard for you to get things in order and get down to business. You aren’t truly carefree – you tend to worry a lot. Try to lighten up a little and remember that not everyone is out to get you.

Leo (July 23rd-August 22nd)
Leo women are a combination of serious and fun. Since they love to entertain, they show their wild and fun side more often. However, they can get down to business when they need to.

Virgo (August 23rd-September 22nd)
Virgos are the definition of serious. Every single choice you make is carefully calculated, and you’re known for making the most practical decisions. It would be good for you to recognize that sometimes, the best decisions aren’t the most rational.

Libra (September 23rd-October 22nd)
Your sign takes certain things more seriously than others. For example, when it comes to issues of injustice, you will remain focused until some sort of compromise has been reached. You have the ability to switch out of this mode of thinking and to become more easygoing when you want to.

Scorpio (October 23rd-November 21st)
You like to keep things inside – and your brain never stops thinking about these things. Since you are so pensive, people might mistake you for being overly serious. However, you know that just because you like to think, it doesn’t mean you don’t know how to sit back and relax sometimes.

Sagittarius (November 22nd-December 21st)
As a Sagittarius, you are a free spirit. You have a ‘go with the flow’ mentality, and you are unbothered by change. You are far from being a serious person. With your head in the clouds, it may serve you well to try and bring yourself back to reality every once in awhile.

Capricorn (December 22nd-January 19th)
Since you are so hardworking, you can come across as very serious and focused. However, this doesn’t mean you don’t like to let loose every once in awhile!