People You Are Drawn to Based on Your Zodiac Sign 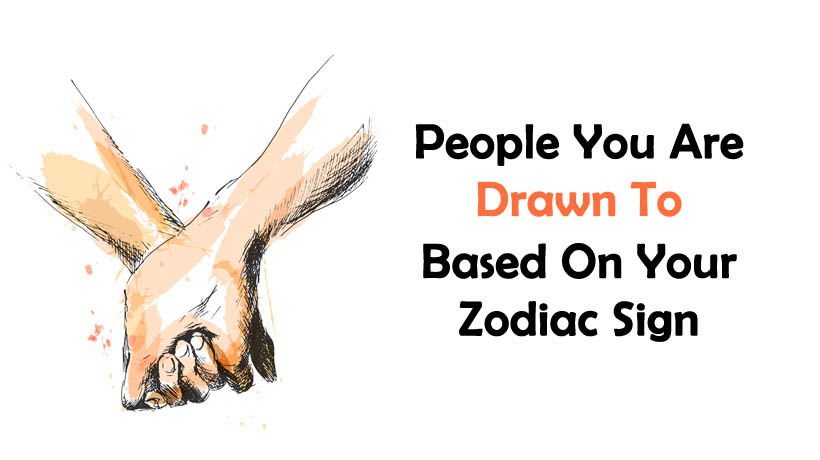 In your day to day life, you may find that you surround yourself with very similar people. You might even have a sneaking suspicion that you’re captivated by specific personality traits. There is a reason for this! According to your zodiac sign, here are the types of people you just can’t stay away from.

Aquarius (January 20th-February 18th)
Aquarius women value their independence and freedom above all else. You keep an open mind when presented with a new situation and you never back down from a challenge. You find yourself surrounded by other people who share your open-minded and determined nature.

Pisces (February 19th-March 20th)
Dull people bore you. You crave creativity and self-expression – you are one of the most artistic signs of the zodiac. The people who you are most attracted to will share this feeling with you. Pisces are also known for their ability to listen to people with an open heart. You’ll never want to be around negative people – that’s why you’ll also make sure the ones closest to you carry good vibes.

Aries (March 21st-April 19th)
As an Aries woman, you have big goals and are confident that you will reach them, no matter what it takes. You are drawn to people who will help you advance and achieve your deepest aspirations.

Taurus (April 20th-May 20th)
Those of your sign are strong and grounded. You have a stable foundation based on your belief in your abilities. You hate it when people don’t follow through on their promises or just drop off the face of the earth – that’s why you’ll always find yourself around reliable, trustworthy people.

Gemini (May 21st-June 20th)
Geminis are always the life of the party – everyone wants to talk to you! You’ll find that you’re always around those who are just as dynamic and interesting as you are. Even if they’re on the quieter side, they’re sure to be equally compelling.

Cancer (June 21st-July 22nd)
You are highly expressive and open when it comes to your emotions. Because of this, you are drawn to people who are good listeners. You feel most secure when your feelings are validated by people you confide in.

Leo (July 23rd-August 22nd)
As a Leo, you are vocal and confident – you certainly know how to command attention. You like being around people who will give you the spotlight, but who will also help ground you.

Virgo (August 23rd-September 22nd)
Virgos pay attention to every last detail. You approach situations with an analytic, realist mindset. You get frustrated by people who can’t stay focused or who gloss over situations. Because of this, you are drawn to people who share your careful approach to any given situation – it helps keep you sane.

Libra (September 23rd-October 22nd)
Libras surround themselves with other intellectual, fair people. Your desire for justice and equilibrium will attract others who have similar sentiments.

Scorpio (October 23rd-November 21st)
You are seen as secretive and mysterious, which makes you compelling. Because you’re wary of blindly trusting everyone you see, you hand-pick the people close to you based on how trustworthy you perceive them to be.

Sagittarius (November 22nd-December 21st)
Sagittarius women crave adventure and excitement. They love to explore new things and get lost in the experience. You find yourself constantly surrounded by free spirits, like yourself.

Capricorn (December 22nd-January 19th)
Capricorns don’t like to be distracted from their goals. That’s why you’re drawn to people who lift you up and support you in anything you do. You are hard-working and determined, so it follows that those with whom you surround yourself will be just as driven.