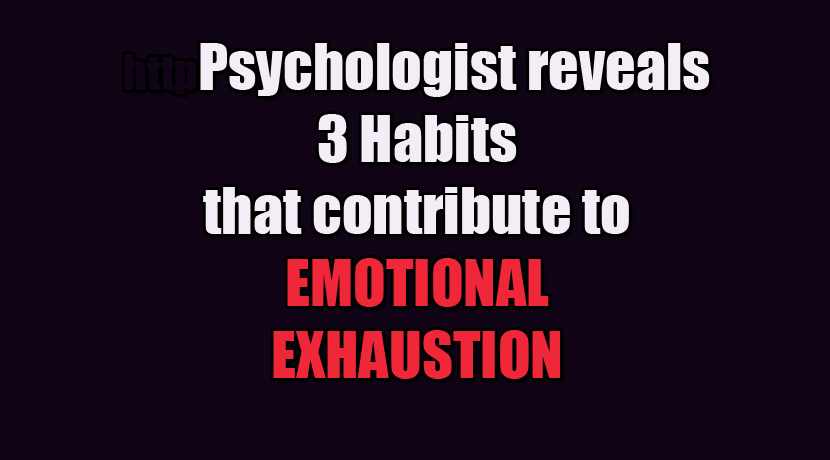 Emotional exhaustion can take a toll on your daily life. Feeling as if you don’t have the energy to focus on the things that really matter is a tough reality to face. Just like physical burdens can put a damper on your mood, an emotional burden can hold much more weight. It places restrictions on the body and mind that can be hard to recover from.

Smaller bad habits like biting your nails might make you feel a little guilty. However, Psychologist Theo Tsaousides, Ph.D., says these 3 habits will leave you completely emotionally drained:

Expectations are the subconscious ideas we create on how things should look, feel, operate, etc. Whether you know it or not, there’s an expectation you have set for almost everyone and everything in your life. When expectations are unachieved or underachieved, it leaves a lingering feeling of disappointment or frustration. Dr. Tsaousides says that unrealistic goals are things that you feel like “should” be happening because you’ve seen it around you. However, he believes that “making “should” statements is often…a pattern of illogical thinking that contributes to the onset and maintenance of emotional challenges, like anxiety and depression.”

While comparison can be a good thing, it’s not fair to compare things that are on different levels. Dr. Tsaousides says that downward comparing—comparing yourself to someone not as successful, attractive, etc. as you—may be a boost for you, but leaves them feeling inferior. Upward comparing—comparing yourself to someone in a higher position than you—can either inspire you or leave you feeling inadequate and unaccomplished. To balance things out, try to focus on aspects of life that are within reach. Oh, and don’t use social media as a comparison tool! According to Dr. Tsaousides, social media gives a glimpse of the things people have achieved but never shows how they achieved it or things they haven’t achieved.

Signing up for more than you can handle is a fast way to drain yourself. Things may seem new, exciting, and fulfilling on the surface but often end up leaving you tired in the end. “Overcommitting can cause overwhelming anxiety, cognitive overload, and mental fatigue,” Dr. Tsaousides says. He also mentioned how being busy is always associated with being successful. It might seem impressive but often comes with a higher price like lack of sleep. Secondly, he attributes over-commitment with the FOMO (fear of missing out) attitude. Finding a balance that works for you between being too busy and not being busy at all is the suggested route to keep you from feeling as if you just can’t get out of bed in the morning.