Are You Ready to Love Based on Your Zodiac Sign? 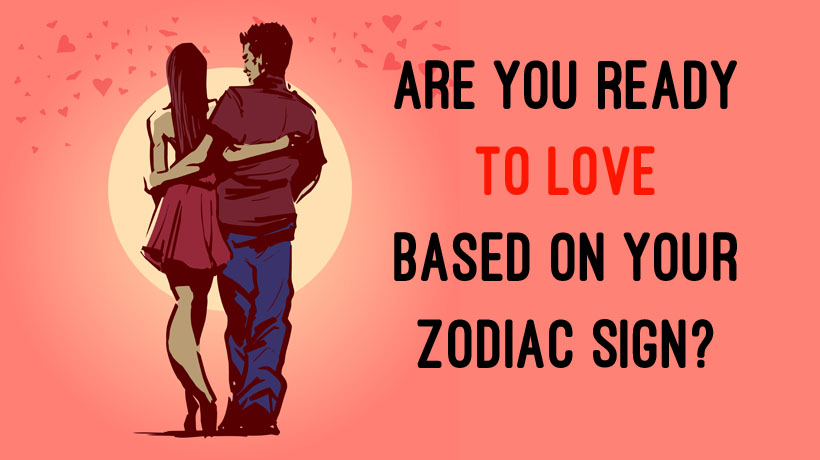 There’s puppy love, purely passionate love and enduring love. It may be intimidating to open yourself up to the more mature types of love. Here’s how you’ll know if you’re ready for something serious.

Aquarius (January 20th-February 18th)
Those of your sign are clever – there’s no denying that. Aquarians are attracted to someone who is intellectual and interesting. You also place a high value on your own independence. Because of this, people may view you as distant and aloof. However, you’re willing to give love a chance; you’re just waiting for the right person.

Pisces (February 19th-March 20th)
Pisces women are romantics. You look for love in every aspect of your life – and you don’t hesitate to give it right back. Try and filter out who you let into your life a little more. Some people might not have the best intentions.

Aries (March 21st-April 19th)
As an Aries, you’ve got a good head on your shoulders and you’re able to see right through fake people. This will directly translate to how you approach romantic situations. Aries women clearly know the ones who are deserving of their love apart from those who aren’t.

Taurus (April 20th-May 20th)
As one of the more logical members of the zodiac, you are hesitant to settle down with just anyone. It can take a long time for you to accept someone new into your life. When you do open up to love, it will be to someone with whom you’ve cultivated a strong, stable friendship first.

Gemini (May 21st-June 20th)
Gemini women are always looking for excitement. They love to get to know new people. Because of this, you might have a hard time with committing to a more serious relationship. You know yourself better than anyone – and if at this point in your life you aren’t looking to dedicate yourself to love fully, then that’s OK!

Cancer (June 21st-July 22nd)
Since Cancers are highly emotional beings, they can sometimes withdraw from people out of a fear of showing this side of themselves. Before opening yourself to love, it would serve you well to first work on validating your own emotions.

Leo (July 23rd-August 22nd)
As a Leo, you are fierce. Your courage is unmatched by other members of the zodiac. Your fearless mentality, combined with your passion for life will lead you to seek out new opportunities for love.

Virgo (August 23rd-September 22nd)
Virgos are notorious for controlling all of the details, no matter what situation they’re in. This applies to their love lives as well. As a Virgo, you tend to overanalyze romantic situations. In order for you to truly accept love, you have to understand that love isn’t something you can plan out meticulously.

Libra (September 23rd-October 22nd)
Libras are always on the lookout for love, even if it may take a while to decide on the right partner. You are easygoing and harmonious, and you bring both of these qualities to every relationship you have.

Scorpio (October 23rd-November 21st)
Scorpio women tend to withhold a part of themselves from even their closest friends. It would be beneficial for you to work on opening up to the people you’re close with now before opening your heart to love.

Sagittarius (November 22nd-December 21st)
As a Sagittarius, your dream is to be whisked away by your knight in shining armor. You have fanciful ideas of what love should be like, but this can distract you from the real world. It’s great to dream big – just don’t discount everyone who doesn’t meet all of your wildest expectations.

Capricorn (December 22nd-January 19th)
Everything a Capricorn does has a reason, as they are known for being sensible people. You aren’t one to rush into love – you prefer to take your time.