What Really Spooks You Based on Your Zodiac Sign? 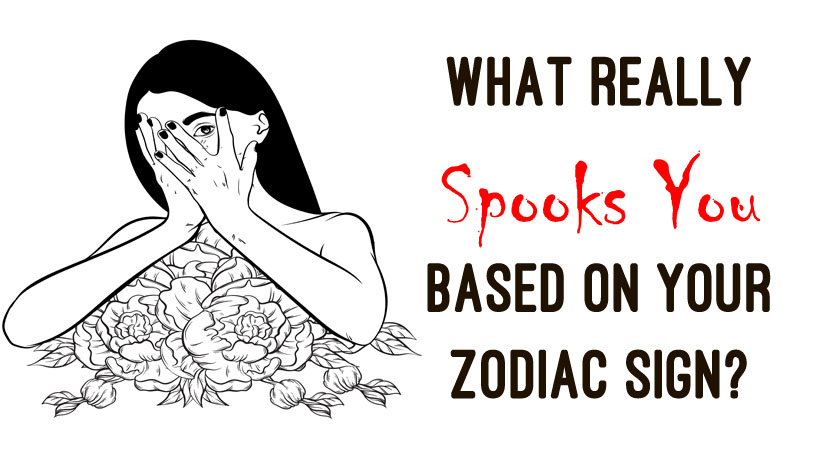 While most people fear death or a haunted house, there are always anxieties below the surface that you might not be aware of. This is what your zodiac can tell you about what really freaks you out, and maybe you’ll finally learn the reason behind your sweaty palms.

Aquarius (January 20th-February 18th):
Your progressive nature perfectly complements your independence because you never let anyone think for you. However, this confidence is quickly shattered in the presence of disagreement, making your biggest fear the rise of injustice and destruction of social peace.

Pisces (February 19th-March 20th):
As a Pisces, your nostalgic mind and desire to be truly close with others sometimes push you away from reality, which causes you to dread the judgement of others. You’re also left completely uneasy when you worry about your loved ones.

Aries (March 21st-April 19th):
Nothing irks you more than being told that you can’t do something, especially when the reason behind this rejection just doesn’t make sense to you. Your stubborn ways quickly turn into full-fledged fear when it comes to your career, for the thought of failing at work makes your stomach turn even more than a rigid set of rules.

Taurus (April 20th-May 20th):
You’re extremely devoted to the ones you love, and even sometimes more to your routine. You pride yourself on being responsible both socially and at work, which is why you often spend sleepless nights worried about any possible changes in your schedule. An absence of security in your daily life gives you goosebumps.

Gemini (May 21st-June 20th):
You’re pretty much always nervous, Gemini, but having to make a big decision sets you over the edge. You constantly question yourself in a way that never allows you to put your mind at rest. It’s not that you can’t handle change, it’s the act of choosing that makes you sweat.

Cancer (June 21st-July 22nd):
Because you always value loyalty in your relationships, you’re frequently paranoid when your friends don’t reciprocate the same level of attention. Your emotions tend to be your worst enemy, thrusting you into a state of fear whenever you have the slightest inkling that others are gossiping about you.

Leo (July 23rd-August 22nd):
You’re feisty and you know what you want out of life, but when others don’t praise you for your choices you get nervous. You rely on validation from everyone and the thought of disappointing the people you respect really freaks you out. You do what you want, but at the end of the day you’re left weighing the reactions of others.

Virgo (August 23rd-September 22nd):
Even the most hard-working people need help sometimes, but you’re not about to ask for it. You’re obsessed with keeping your life in order as a way to ensure successful results and a healthy mind, but any slip-up that causes you to step out from behind the scenes and acquire some assistance has you running for the hills.

Libra (September 23rd-October 22nd):
You run into problems when your desire to be unique butts heads with the need to confront. You like to walk to the beat of your own drum, and the thought of someone asking you to comply with social norms alarms you – especially if you’re forced to argue.

Scorpio (October 23rd-November 21st):
Scorpio, your fear is a big hypocritical; you dread telling others your secrets yet you expect complete honesty from others. You’ll always keep your mouth shut when it comes to your personal life because you have a hard time trusting people, but you’re completely consumed with paranoia if you think that someone is revealing their secrets to you.

Sagittarius (November 22nd-December 21st):
Your freedom is very important to you, which is why the inability to create new adventures frightens you. You don’t know what to do if a new friend or significant other doesn’t give you your needed space because you need to go wherever the action is, no matter who you hurt in the process.

Capricorn (December 22nd-January 19th):
You always think you know best, and this quality follows you into every aspect of your life. You need to do things yourself because even if you love someone, deep down you just know you get things done better. You’re truly horrified at the idea of someone taking over a task that you believe is better suited for you, and you won’t sleep until you get involved.