Research Reveals the Arguments That Could Be Red Flags for Divorce 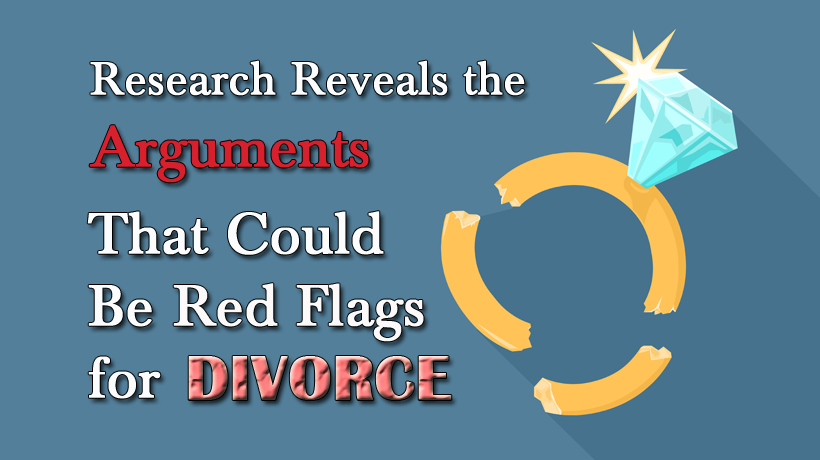 One could argue that married couples ultimately fight about the same type of things, and when these disagreements can’t be resolved they inevitably lead to divorce. Some believe it’s important to argue in a relationship to share any grievances a person may have about the other, but a study conducted by faculty of the Department of Psychology at the University of Denver revealed that 72 percent of couples interviewed post-divorce had at least one partner report that conflict and arguing was a major contributor to the divorce.

Is the content of these arguments the game changer in whether a marriage is successful, or is it a combination of factors? Research suggests that there are common, recurrent disagreements among couples who are about to call it quits.

Arguments about sex life
One common argument between couples who are likely to consider divorce concerns sex life. If the couple feels that their sex life is no longer satisfying, this might not fit with possibly unrealistic expectations for an ideal, long-term partner. Marcia Naomia Berger, psychotherapist and author on several books about marriage, cites one example where “‘a wife who focuses on her husband’s faults and often criticizes him can end up with a husband who’s lost interest in sex with her.’” Couples might feel as if their partner has changed since the start of the marriage because they no longer share this passionate connection.

To reestablish this connection, Berger says that “‘couples who talk through what’s behind the symptom of sexual disinterest are the ones who learn how to remedy the situation.’”

Arguments about commitment
Couples often fight most when they feel that one partner has “checked out” of the marriage. Once one partner starts to question whether the marriage will survive, this is certainly a red flag. This feeling of disconnectedness could even lead to one partner straying and cheating on the other.

To rebuild your shared narrative as a couple, Alexandra H. Solomon, a clinical psychologist at The Family Institute at Northwestern University, recommends setting some new goals together. This could include rituals like movie nights or an annual vacation.

Arguments about communication
When couples feel that a partner no longer listens to them or understands them, this will create a feeling of distance. Psychologist Nikki Martinez admits that this is the most popular point of contention between couples, where couples stop being transparent and start hiding things. This is the biggest make-or-break factor in a relationship, because clear communication is a must when resolving any problem.

Couples can often start to lack the ability to collaborate or cooperate when they fight frequently. For this reason, it’s crucial that couples remain open to understanding each other’s perspectives. As a therapist, Solomon recommends that couples actively look for pieces in a partner’s story with which they can empathize.

Arguments about not feeling important
Just as mistrust and resentment forms when partners stop communicating, so does distance when couples misinterpret their partners’ actions and feel that they are taken for granted. Another common red flag argument is when one feels that their partner does not care for them because they assume they will always be there. San Francisco-based marriage therapist Susan Pease Gadoua emphasizes that the key to a happy marriage is actively appreciating the other in small ways, and reminding the other that they are loved. This could be as simple and explicit as telling your partner that you love them.

While there may be a pattern in the arguments among couples who seem headed for divorce, it’s important to acknowledge that the way couples resolve these arguments is more telling for the future of the relationship than the content of these disagreements. As long as both people move forward from the argument with clear goals to learn from their mistakes and to learn how to better respect their partners’ wishes, divorce can be avoided. However, if the same arguments persist, it’s certainly time to examine the relationship’s trajectory and the reason for why these topics cannot be resolved.