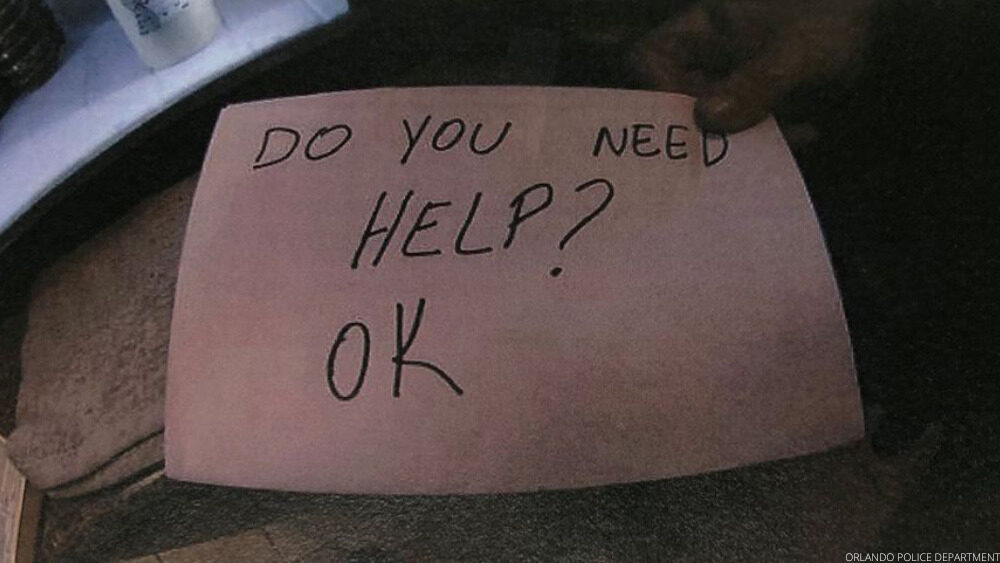 Prosecutors said Timothy Lee Wilson “tortured, maliciously punished, and deprived” his stepson “of food and water for days at a time,” according to a featured story on PEOPLE.

When the Swann family chose Flaviane Carvalho’s restaurant for a meal, she immediately noticed something nefarious was afoot. Carvalho, the manager of the Mrs. Potato restaurant in Orlando, noticed that one of the two children seated at the table was covered in bruises, scrapes, appeared to be malnourished, and was the only person at the table who didn’t order a meal. She also noticed that he was seated away from his parents and sibling, “secluded.”

“When Ms. Carvalho noticed injuries on the victim, she signaled to identify whether he was in need of help by holding up a sign out of the sight of Mr. Wilson, and he acknowledged that he did,” reads the police report.

Carvalho had shown the boy a piece of paper reading, “Do you need help?” After signaling that he did, the manager then wrote “OK” and called 911.

Wilson was then arrested on January 1st, 2021, at the restaurant.

After obtaining a search warrant of the boy’s home, police learned that “the victim was kept in a separate hotel room used for storage, away from Mr. Wilson, the victim’s mother, and the younger sibling,” according to the report. The forced isolation was so thorough that duct tape covered the peep hole to the boy’s room.

“He routinely was deprived of food and beverages, was made to do military-style exercises, hung upside down from a door by his neck and feet, and at one point, handcuffed to a dolly cart on Christmas Day,” the police report reads. “Officers recovered multiple items used as weapons — a bent metal pole, a wooden broom, a dolly cart, handcuffs, and ratchet straps used to tie the victim up.”

According to the Orange County State Attorney’s Office, 36 year old Timothy Wilson has since been sentenced to prison after he was found guilty Monday of two counts of false imprisonment of a child under the age of 13, three counts of aggravated child abuse with a weapon, four counts of aggravated child abuse, and one count of child neglect. It took the jury just two hours to find Wilson guilty of all 10 accounts.

The victim’s mother, 32-year-old Kristen Swann, pleaded not guilty to multiple felony abuse charges, including neglect of a child, aggravated abuse and failure to report child abuse. She allegedly admitted to investigators she was aware of the abuse, but did nothing to stop it and repeatedly failed to seek medical attention for her injured child.

Kristen Swann’s trial has been set for July.