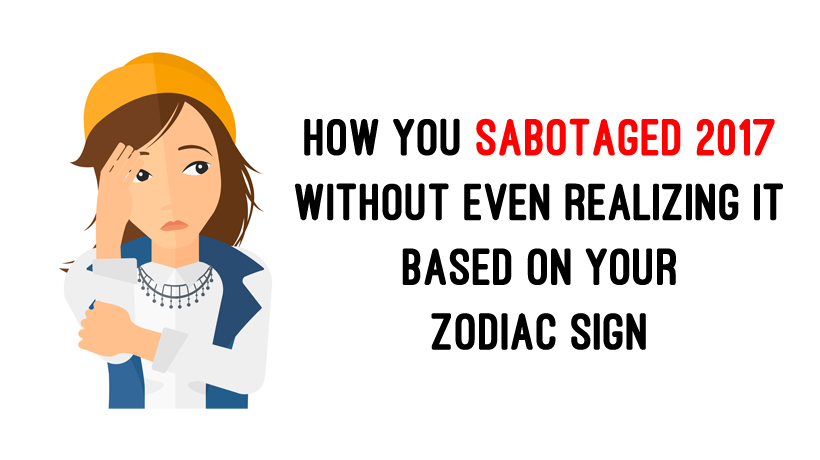 Despite your best efforts this year, you’ve undoubtedly fallen a bit short in some aspects of your life. This is what your zodiac sign can teach you about the mistakes you’ve made so that once 2018 hits, you can start the year off stress-free.

Aquarius (January 20th-February 18th):
This year, you let a lot of your relationships suffer due to your trust issues, and this has only made you close your heart up even more. Going into 2018, you’ll have a lot of relationship reconstructing to do. Make sure that you go into the new year with an open mind in order to distrust only those who give you reason.

Pisces (February 19th-March 20th):
You’ve spent so much time thinking about the past that you forgot to live in the present. You’re able to attract new people into your life due to your compassionate nature, but you lose them the second you overwhelm yourself with the what ifs.

Aries (March 21st-April 19th):
Your life is hectic by choice, but this has prevented you from slowing down in order to appreciate the things that truly matter. Impulsivity doesn’t have to be a bad thing – you just have to reflect on your adventures afterwards to make them count.

Taurus (April 20th-May 20th):
You completely missed out on new opportunities in 2017 because you were too afraid of change. You don’t have to compromise your responsible side in order to spice up your lifestyle. Instead learn how to integrate new, small-scale activities into your routine so that you don’t find yourself stuck.

Gemini (May 21st-June 20th):
Most of your 2017 was spent wasting time while you were trying to make decisions. You allow your indecisive behavior to get in the way of your success, both in your work life and social life. This will only get worse next year if you don’t learn how to prioritize and make important choices.

Cancer (June 21st-July 22nd):
Unfortunately, you allowed your insecurities to get the best of you this year, for you let your suspicions take the place of reality. You closed yourself off to new people, which really limited your social circle.

Leo (July 23rd-August 22nd):
Your stubborn side really took over recently, and this caused you to push people out of your life unintentionally. The new year is all about making positive changes, which means that no one is going to waste their time on arrogance. Remember that you have to show the people you care about that they have value too.

Virgo (August 23rd-September 22nd):
You got yourself stuck in some unfortunate situations over the past year because you just will not ask for help. When you have questions but let them fester with the hope that you’ll magically figure things out, you get yourself into trouble.

Libra (September 23rd-October 22nd):
Because you tend to avoid confrontation, you let your friends dictate your life in 2017. You’re afraid to say no and ruin the mood, but this has only caused you to hurt yourself. Remember that your loved ones can take it, and they might end up enjoying your suggestions even more.

Scorpio (October 23rd-November 21st):
You’ve spent more time tending to your friends’ needs this year than your own, and while this makes you an amazing companion it doesn’t help move your life forward. 2018 has to be the year of you; make a list of the things you want and go for it.

Sagittarius (November 22nd-December 21st):
You redefined ‘flaky’ this year, for you often gave up on your obligations and pulled away from people that were just beginning to like you. You dug yourself a hole, but this doesn’t mean you have to lie in it. Forge your connections before it’s too late and remember to apologize for your unreliability.

Capricorn (December 22nd-January 19th):
Your go-getter attitude has caused you to believe that you’ve peaked, and this has made you indifferent to the new year. Negativity has begun to enter your life because you feel as though you’re working towards nothing, but you have to turn this around. Remember good things come to those who wait, and great things come to those who work hard.