Emotional Vampires: How to Handle Toxic People Who Drain and Manipulate You 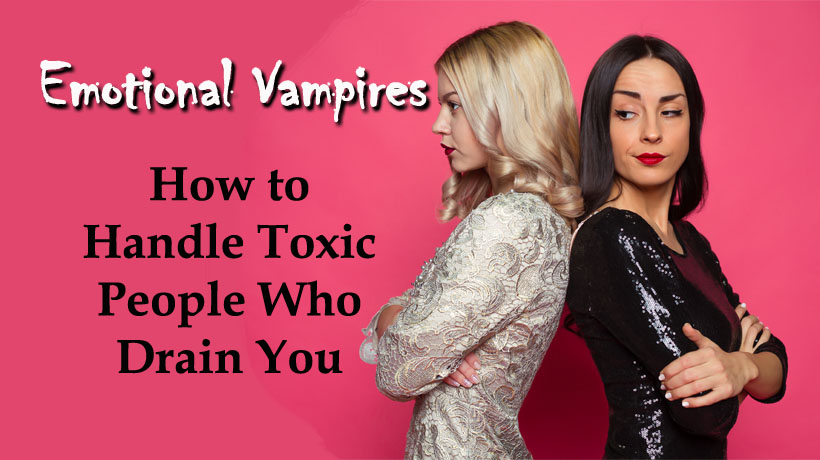 Sometimes no matter how badly we want to be a good friend, some people just drain us emotionally. These are people who never seem to be happy, who always find something to complain about. No matter how much you try to cheer them up, they feed off the energy you put out.

An emotional vampire can be anyone. If you think you might be dealing with one, keep an eye out for these red flags.

They always need validation
Everyone has a friend that can’t stop putting themselves down. They’re incredibly self-deprecating, and often say things like, “I’m no good at this,” or, “I look awful today.” No matter how many times you try to boost their confidence, they won’t budge. And if you say nothing, then their feelings are hurt.

Drama’s their middle name
A friendship requires give-and-take, but some people aren’t able to do that. The problems in their life are always the most important, and if you try and talk about your own frustrations, they’ll say, “Oh that’s nothing, this happened to me…” Oftentimes you won’t even be able to get a word in; it’s as if they’d rather talk to a mirror.

Overly pessimistic
There’s nothing wrong with venting after you’ve had a hard day, but some people never seem to be in a good mood. Even if you try to look on the bright side of things, they’ll find something to complain about. They might claim that you “don’t get it.”

Need to be the center of attention
While they may seem extremely charismatic, they always feel the need to be in control of conversations during get-togethers. They might interrupt others or make an announcement at an inappropriate time—anything to turn the limelight back on them. If they don’t get their way, they might blow up. Publically. So everyone knows.

They try to manipulate you
People who are emotionally draining may be manipulating you too. They might seem to know all the gossip, and that could be because they’re the source of all that gossip. If you’ve ever had a conversation with someone, agreed with them, and then later asked, “Wait, why would they think that?” then you may have been in the clutches of an emotional vampire.

Always have a scapegoat
No matter what, these people have an excuse. Whether it’s their boss, their family, or their friends—the problem’s because of someone else. Emotional vampires fail to realize that their behavior drives others away. Know that you can’t change them, and reconsider who you allow into your life.

If you have to deal with an emotional vampire…

Keep your interactions short and to the point.

Don’t reveal anything too personal.

Take what they say with a grain of salt.

The content in this article is the opinion of the writer.