Is He Smothering You? (4 Ways He Loves Too Much) 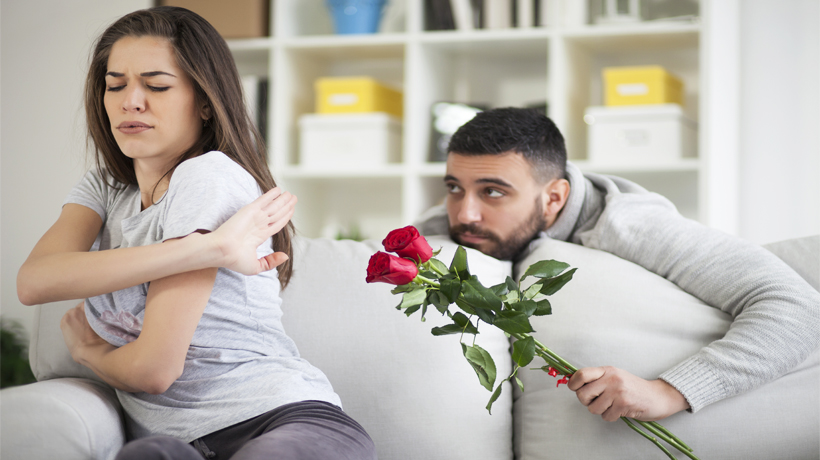 Our culture comfortably says that men are not in touch with their feelings – that they are distant and withhold love. But there is another side to the story.

“I’ve never loved anyone like this before, my sweet potato”
In the mind of a man there exists a hopeless romantic. But in that quest for storybook love, he may be putting unrealistic expectations on you. The unfulfilled fantasy will turn into resentment – yours or his.

“Whatever you want to do, my darling turtledove”
Maybe you fell for this guy because he does important work with endangered species or volunteers a lot of his time for other good causes. But then he begins building his world around you, which sounds sweet, but easily becomes a burden. Now you’re making the decisions and he’s following you around like a loyal puppy.
Here’s a tip: if you want a puppy, get a puppy. If you want a man, make sure he keeps loyal to his own priorities, as well as to you.

“Oh my cherry bloss-” “STOP WITH THE PET NAMES ALREADY!”
If he never calls you by your name and only by annoying love monikers (“shmoopy”, “dumpling”, “love muffin”, you get the idea) then he might not be in love with you as much as with the idea of being in a loving relationship. It is vital that when two (or more) people are in a loving relationship that they be present and acknowledged for who they are. Maybe insist on being called by your name, at least in public.

“I want to meet your family and all your friends”

If you are a parasite, you need a host. So you bite the cat, burrow in so you can’t be scratched out, and feed off of Miss Whiskers until you are bloated and … yuck. My point is that he wants to know everyone in your life so he can attach himself to your life and, in so doing, make himself an irreplaceable part of it.

So wait … why is he doing this?

A great article by Susan Krauss Whitbourne Ph.D. for Psychologytoday.com states that it begins with how he formed relationships as a child.

“[If there is a] pattern of emotional neediness, instability, and ultra-sensitiveness to rejection [it] could very well explain why some people, under some conditions, become victims of bad, mad love. They may have a propensity to behave in a way that causes them to cling to partners who, in turn, become more likely to get up and leave.”

So he wants love so much that he attaches himself to you and builds his world around you because you represent the love he wants, even though he knows he may be driving you away.

There are no bad intentions here. He wants love – he wants it from you. But he overdoes it and has issues that need to be addressed. Of course, you don’t want some guy who is aloof and distant, but the good news is that there’s a biiiiiig sweet spot in between not enough love and too much.