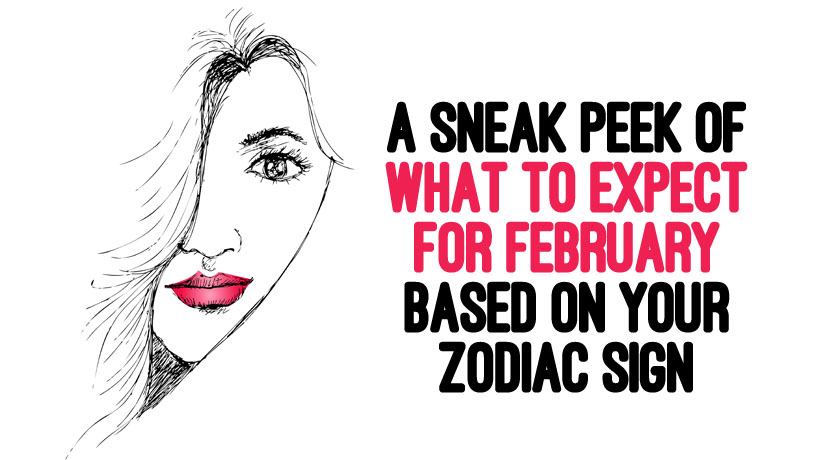 Can you believe this month is already coming to an end? It seems like we were just watching the iconic ball drop in Times Square. Let’s take a look at what February might have in store for us.

Aquarius (January 20th-February 18th)
Your varied interests are making waves for a full social calendar next month. Prepare yourself for interesting conversations and discussions that are right up your alley. But keep on top of your tasks as well – the pull to procrastinate will feel strong.

Pisces (February 19th-March 20th)
A new moon and partial solar eclipse making its way mid-month will bring about some trouble in communication. People may fall short of what they say they’ll do (yourself included) but it’s best to ride the wave and accept what you cannot change.

Aries (March 21st-April 19th)
Potential career or networking opportunities may be coming your way. Step outside the box to take full advantage of them, and choose wisely (go with your gut!)

Taurus (April 20th-May 20th)
February may offer new perspectives – you may find yourself contemplating things you wouldn’t normally think twice about. Out with the old (toxic thoughts), and in with the new (positive outlook).

Gemini (May 21st-June 20th)
You may be feeling more mentally organized in the beginning of the month, but also more intuitive. Your debating nature may soften up and become more sensitive to the feelings of others.

Cancer (June 21st-July 22nd)
Logic and emotion might feel difficult to navigate next month, and there may be some miscommunication or misconstrued details. Don’t beat yourself up for others’ reactions – just do the best you can.

Leo (July 23rd-August 22nd)
You may find yourself craving love and affection even more than usual. Luckily, some romantic scenarios may present themselves – stay alert.

Virgo (August 23rd-September 22nd)
Your creativity may reveal itself more than usual with things like tackling a DIY project, writing poetry or trying out a new recipe.

Libra (September 23rd-October 22nd)
You may experience a general sense of optimism and well-being, but also some nostalgia. Things can’t go back to how they used to be, Libra, but you can try to recreate that feeling in a new way.

Scorpio (October 23rd-November 21st)
You may feel a bit more distrusting of others than usual, Scorpio, and you’ll have to work hard at reading people’s motives. Luckily, this time to yourself may allow you to tap into some creative energy. Pull out your notebook of ideas and get inspired.

Sagittarius (November 22nd-December 21st)
If there’s a current situation where fairness is in question, you may be inclined to call attention to it – and you won’t stop until you have a say. This month is also a good opportunity to make your talents known.

Capricorn (December 22nd-January 19th)
This month may have some ups and downs, but don’t get thrown. Tough decisions may need to be made, but listen to your heart and choose wisely.