Take a Leap of Faith 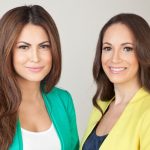 Clearly, the age of social media is upon us. Everything from personal communication to ordering food is done online these days. It’s no surprise then, that businesses small and large need to market themselves on these channels to be successful. Stephanie Abrams and Courtney Spritzer created SOCIALFLY—a social media and PR agency. Coming from backgrounds in hospitality and finance, these women decided to trust their gut, dive in, and never look back.

While studying at Cornell in the early 2000s, Stephanie was one of Facebook’s first users. “I had the intuition that it was really going to change the way we do business,” she says. After college, she helped some friends put together strategies using social media, which eventually gave her the idea to start her own agency. “I knew things were changing, so I was willing to take the risk.”

Courtney meanwhile, having graduated from NYU, was working in finance at American Express—one of the first companies to use social media to provide benefits to its card members. “If a company like American Express could find a way to leverage social media, then small businesses could benefit too.” She met Stephanie who was looking for a business partner and the rest is history.

While there were many sleepless nights, the risk paid off. Socialfly now successfully has clients from the fashion, beauty and hospitality industries. Their foresight wasn’t plain luck. “Courtney and I are both extremely hardworking go-getters,” Stephanie says. “We know what we’re both really strong at, and what we’re not so good at. We don’t pretend that we know everything. We’ve built an amazing group of mentors and resources we can call on to grow our business.”

Courtney offers another secret to their success: “We’ve been networking since day one. The first thing we did when we quit our jobs, and even before then, was to go to networking events and spread the word about Socialfly. We still have that mentality to this day, whether we’re out on vacation or out with friends—we’re always talking to people about Socialfly.”

Stephanie’s advice for the next group of entrepreneurs is, “It’s important that whomever you work with has an opposite set of skills than you, so there’s less overlap. That way you’re both able to bring something to the table.” She adds, “You have to take calculated risks.” Courtney agrees. “Go with it. Take that leap of faith.”

More from Courtney
and Stephanie…

What is the best part about your job?

Courtney: It doesn’t ever get boring. There’s always a new client, event, or something new happening in the social media industry.

What’s the most challenging part?

Stephanie: Having work-life balance is definitely something that’s daunting. Social media is a 24/7 job, and so is running your own business. Trying to find down time to relax, meditate, or do some yoga is a challenge.