The Best Relationship Advice Based on Each Zodiac Sign 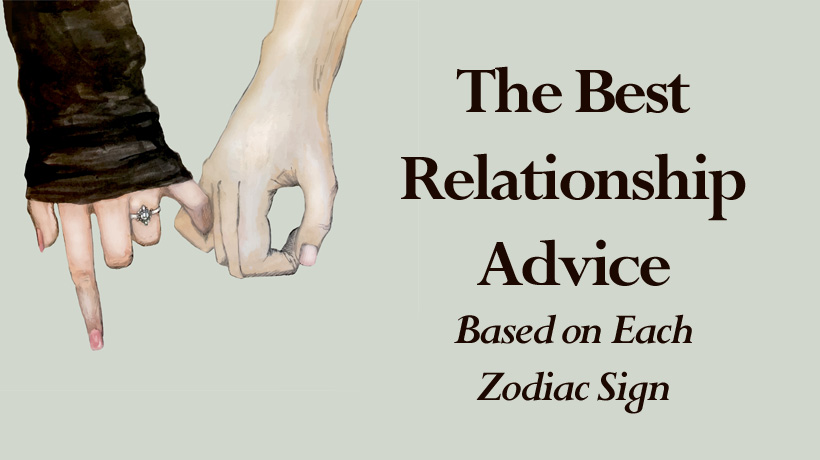 Anyone who’s been in a relationship knows it isn’t always full of rainbows and sunshine. As creatures of habit, we have a tendency to be stuck in our ways or beliefs, which don’t always gel with our partner’s, regardless of their zodiac sign. And while some people may believe they’re always right, it’s safe to say that everyone could stand to receive some sage advice on their relationship.

Whether you believe in astrology or not, these tips may just help you out in current or future relationships. Here’s the best relationship advice according to your zodiac sign!

Aries (March 21st – April 19th): Don’t be so competitive
There’s a reason we call our significant others our partners. It’s because you’re supposed to be one half of a team that works well together. But competitive fire sign Aries has trouble playing well with others because they always want to win, and this theory also applies to their relationships. Trying to one-up your partner or constantly shutting down their ideas or opinions because you believe you know best can cause your relationship to go up in flames.

Taurus (April 20th – May 20th): Don’t be afraid to shake things up
As a fixed earth sign, Taurus is prone to becoming complacent in all areas of their life, and getting them to try new things can be like pulling teeth. If they’re used to spending every Sunday in bed with their partners watching Netflix and eating croissants, then you better believe it’s going to be difficult to convince them to do anything else. Being stuck in a rut can make their relationship become boring or stale, and Taurus will need to venture out of their comfort zone to keep things fresh.

Gemini (May 21st – June 20th): Don’t avoid your problems
Since Gemini is ruled by Mercury, the planet of communication, many would assume that they’re wizards at talking through problems in their relationship. But sadly, that isn’t the case. Gemini does some pretty fancy footwork when it comes to dancing around their issues, and they’ll often use their excellent communication skills to avoid speaking on the problem at hand. They may try to change the subject or diffuse the situation with flattery, making their partner think Gemini isn’t taking them seriously.

Cancer (June 21st – July 22nd): Don’t let your relationship become one-sided
As a water sign, Cancers tend to be very in tune with the emotions of themselves and others. This causes them to go into full-on nurture mode, making sure their partner feels nothing less than absolutely adored and cared for. While this can be a good thing, sometimes Cancer will let their own feelings and needs fall to the wayside, outwardly telling their partner they don’t need anything while inwardly feeling sad or unappreciated.

Leo (July 23rd – August 22nd): Let your partner take the reins
Similar to Aries, fire sign Leo likes to take a my-way-or-the-highway approach to things. They believe they have the best ideas and taste, and they tend to impose said ideas and tastes onto their partner. And while their preferences can usually be trusted (it’ll probably be your Leo friend who gets you into that exclusive summer party), Leos need to understand that sometimes they have to let their partner take the wheel if they want to stay on course.

Virgo (August 23rd – September 22nd): Don’t be so critical
Virgos can be their own (and everybody else’s) worst critic, as they desperately strive for perfection in everything they do. They believe in working hard to get what you want, and sometimes they’ll work a little too hard on trying to change their partner or improve their relationship. Virgo needs to understand that things won’t always be perfect, and pushing your partner to change will actually just push them away.

Libra (Sept. 23rd – October 22nd): Know yourself before you get into a relationship
In astrology, Libras are represented by the scales, meaning they crave harmony and balance in all aspects of their lives. This can leave them in a constant state of indecision, unsure of what they truly want or need. Obviously, this is not a great trait to bring into a relationship, as Libra can be completely happy in their relationship in one moment, and secretly letting their eye wander in the next.  Libra needs to examine themselves and their desires before entering a relationship to make sure it’s really what they want.

Scorpio (October 23rd – November 21st): Don’t be so controlling
Scorpio has as much passion as they do intensity, and they enjoy control in their work lives as well as their relationships. However, this need for control can sometimes become downright possessive, and Scorpio can often smother their partner with their obsessive antics. If this water sign can’t figure out how to relax and come up for air, their relationship will end up drowning.

Sagittarius (November 22nd – December 21st): Don’t be afraid to commit
Sagittarians are curious and optimistic creatures who love having the freedom to explore and try new things. It’s why they’re so hesitant to commit to anything long-term: jobs, homes, or relationships. They fear that they’ll lose their sense of freedom and be forced to settle into a boring, mundane life or routine. This causes them to miss out on all of the good things that come with a committed relationship or career. Sagittarius needs to work on their fear of commitment and understand that another person can actually add to their happiness instead of taking away from it.

Capricorn: (December 22nd – January 19th): Don’t be afraid to open up
Capricorns are ambitious and career-driven and they don’t make time for much else outside of work. They can also come off as cold or unemotional, and they may find it difficult to open up or show their vulnerable side in relationships. Capricorns need to understand that sometimes it’s okay to put work on the back burner and let their feelings take center stage for the sake of their relationship.

Aquarius: (January 20th – February 18th): Don’t overthink things
Aquarians are inquisitive individuals with their own unique thoughts and ideas. This air sign tends to spend a lot of time in their head, thinking their way through problems instead of recognizing their (or others’) emotions. This can cause them to constantly overthink things as they search for a rational explanation for what’s happening. Aquarius needs to learn to stop thinking with their head all the time and start feeling with their heart.

Pisces (February 19th – March 20th): Don’t get lost in the clouds
Water sign Pisces practically invented daydreaming. This sign can get lost in their fantasies, and have a tendency to idealize their partners or relationships. This becomes a problem when Pisces’ partner doesn’t live up to the romanticized version in their heads, causing them to want out of the relationship. Pisces needs to learn that putting others on a pedestal will only backfire, and accepting people with all of their flaws will make for a happier relationship in the long run.